Our family adventures are often long in the planning and our trip to the Anasazi ruins of Grand Gulch in Southern Utah was no exception.  I had wanted to visit Grand Gulch since reading accounts of recent day explorers who had found artifacts and adventure in the narrow desert canyons.  Long before the trip we bought new backpacks for our boys and new sleeping pads for Lucy and me.

We know that food preparations need to be completed a week before the trip and in spite of these preparations we still seem to get to bed much later than expected on the eve of our departure. 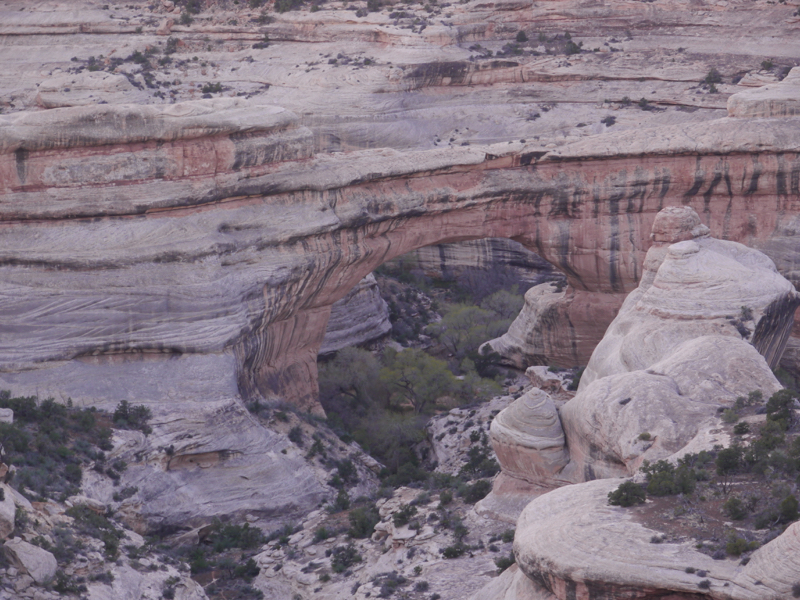 We arrived in Blanding later than planned and then drove to Natural Bridges National Monument where we were fortunate to find an open campsite.  Luckily we didn’t have to resort to our secondary plan of finding some place on BLM land to camp.  After setting up camp and eating dinner there was still enough time to drive around the main loop in the park and see the three main bridges for which the monument is named. 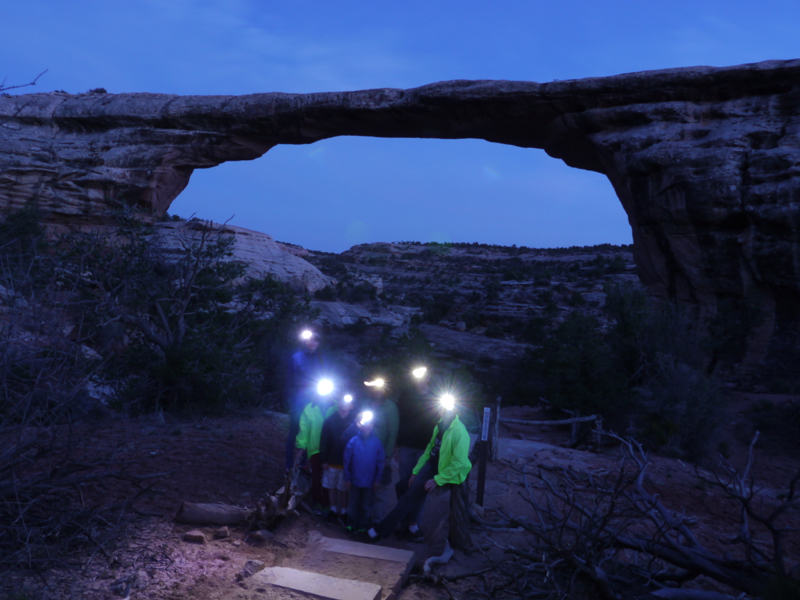 The last family photos for the evening were more of our headlamps than of the family standing under a natural bridge.  We enjoyed the short walks to the bridges and were happy to retire to a warm sleeping bag.

The next morning we met my brother and his family at the ranger station for Grand Gulch where we watched the required video about respecting the natural resources before we were allowed to start on our hike.  The ranger was also sure to give us alternate activities in case we had troubles with our small children.  This emphasis may have been larger than normal because there had been several missing persons efforts the week prior to our entering the canyon.  The ranger asked me if I could hear the plane and told me that it was searching for someone who had gone missing two days prior.  She showed me a photo of Ed from Ohio who was missing and she wanted us to look out for him when we entered the canyon.  When I had entered the visitor’s center I had talked with a guy who had hurt his knee in the canyon and was sitting in the corner with ice on his knee.  I asked the ranger if Ed might be the man in the corner.  It was Ed and we were all glad he made it out after two nights without any gear.  I’m not sure how he didn’t freeze to death because it had been quite cold.  As we walked through the canyon we would take turns saying, “If I were Ed I think I would sleep there for the night,” while pointing to some well protected nook in the rocks. 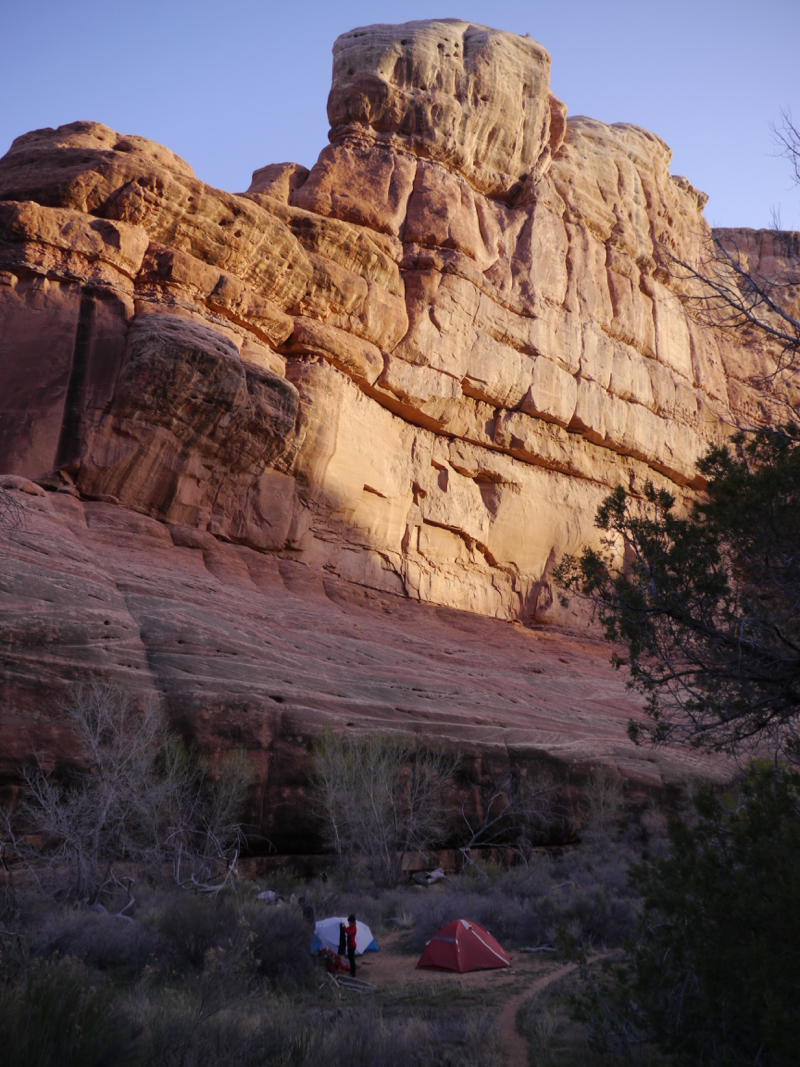 The first miles of the trail slope gently downhill and make for easy walking.  Our intended destination for the first night was about a seven mile walk, but at about mile three my son realized that he had left his retainer in the car window.  Because my wife and son both were sure that it would deform in the heat of the car and be destroyed and that he would have to start his orthodontia over again if it were destroyed my son and I dropped our packs at the side of the trail and walked back out to the car, grabbed the retainer and headed back down the trail to our packs and proceeded to our intended campsite where we met up with the rest of our party. 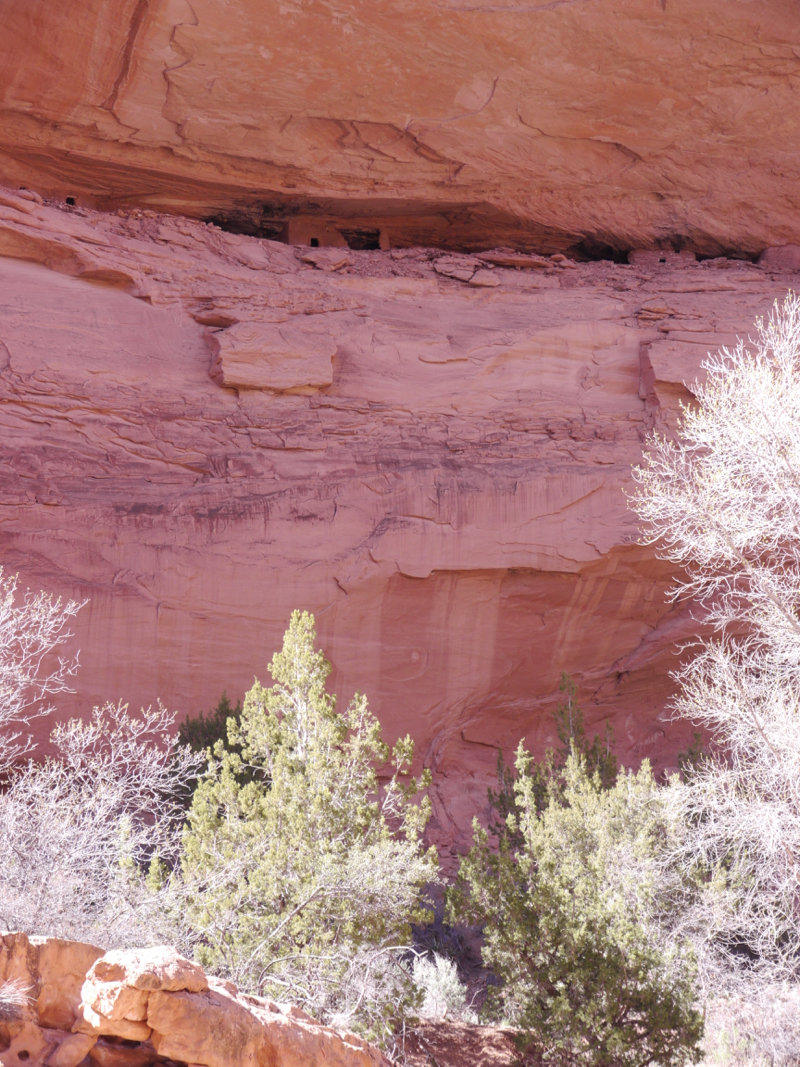 About four miles from the parking lot we came across our first set of big ruins, Junction Ruin.  Because we were in a hurry to catch the rest of our party we didn’t want to stay and explore too long, but we dropped our packs and did a quick survey of the site.  We put our packs back on and headed down the trail to the confluence of Grand Gulch and Todie Canyon was water and a little further up the canyon were some ruins that we explored the next morning. 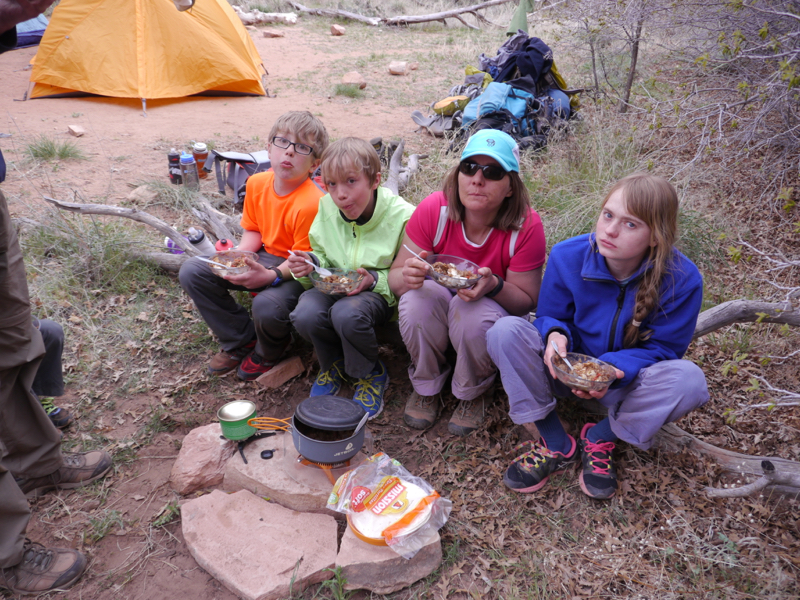 I have a tendency to plan to do more than I can ever do and this carries over into my vacations as well.  We thought we would get going earlier on day two than we did on day one, but we started at about the same time.  The second day turned out to be quite a bit more difficult than we had anticipated.  We thought we had eight miles of hiking, but my brother’s GPS indicated that we had walked ten miles before we hit camp. 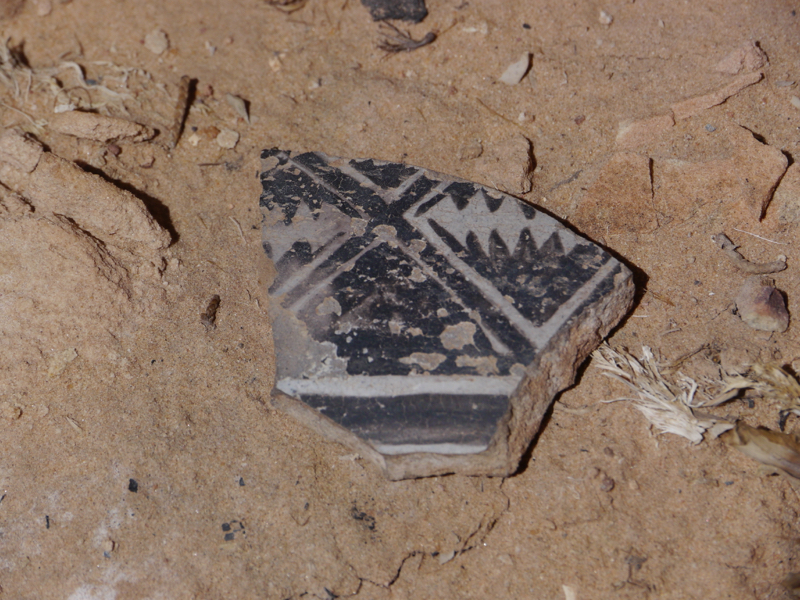 The gentle sloping trail of the previous day had been replaced by abrupt up and down sections, entering and leaving the stream channel.  In our earlier discussions we had contemplated hiking two miles beyond the campsite where we stayed so that we could get out earlier the next day, but by the time we got to the first campsite we were convinced that we wouldn’t make it another two miles before we wanted to be in bed so we set up camp at the junction of Grand Gulch and Bullet Canyon and were very glad to rest our aching feet. 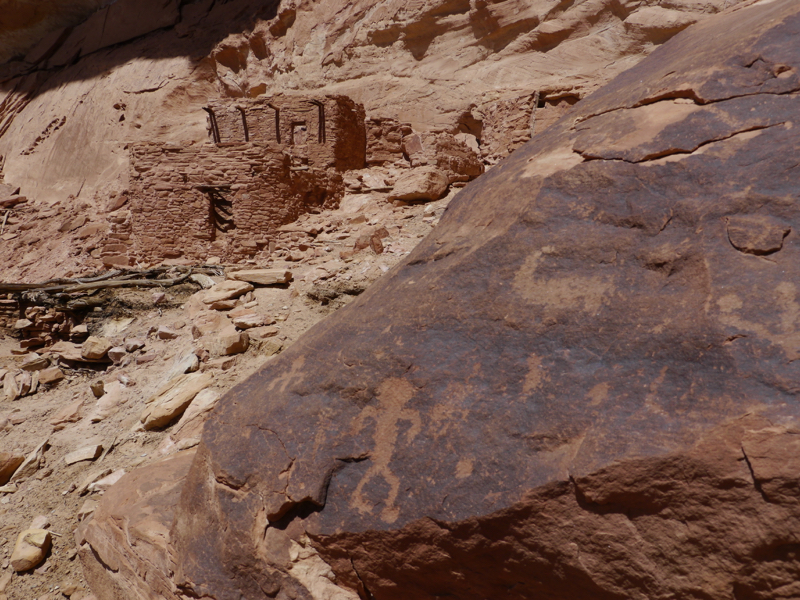 We had seen some pretty impressive ruins throughout the day including Split Level Ruins.  My favorite ruin of the day wasn’t even noted on the map we had.  Again our campsite was very nice and the food always tastes delicious when we are so spent.  Maybe we wouldn’t be so spent if we didn’t bring such good (heavy) meals, but we like the food. 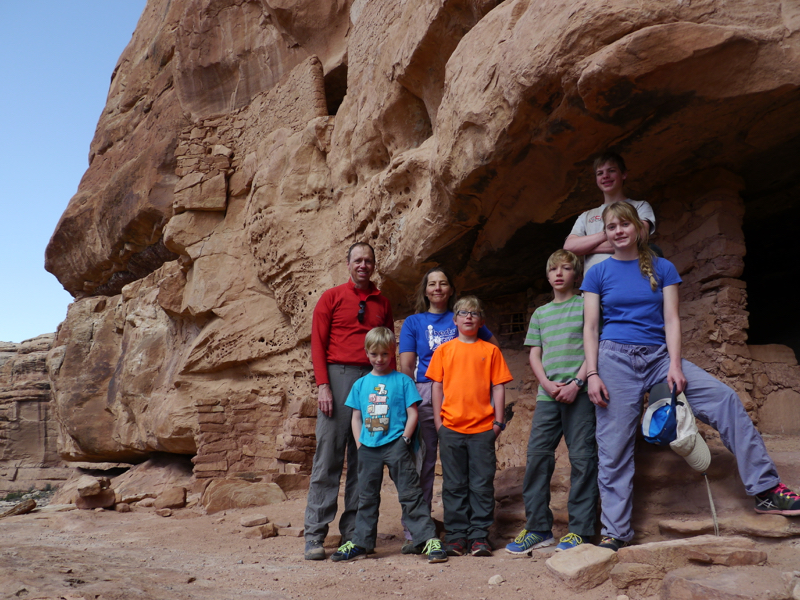 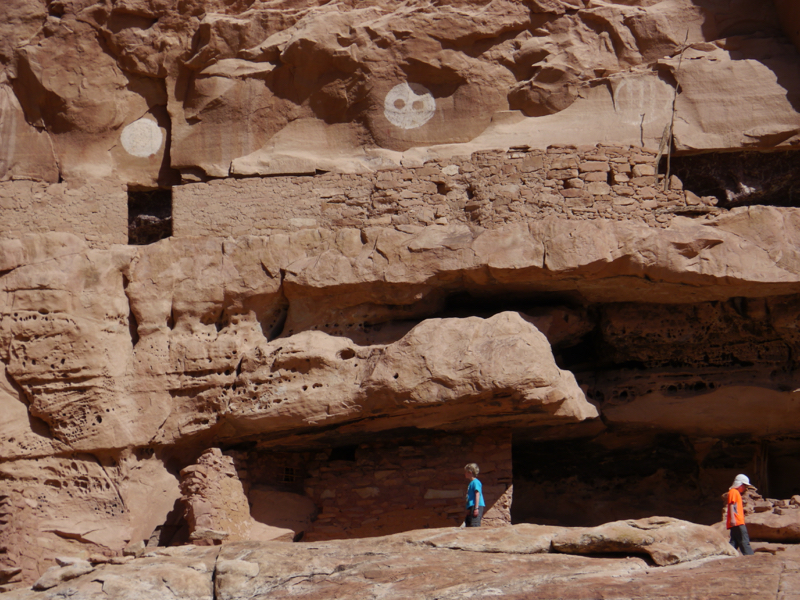 On our third day of hiking we did actually manage to get out of camp earlier and we got to Jailhouse Ruin in good time where we saw the alien head above the ruins.  Just a little later we got to Perfect Kiva Ruin where there is a Kiva that has been reinforced so that one can climb down inside. 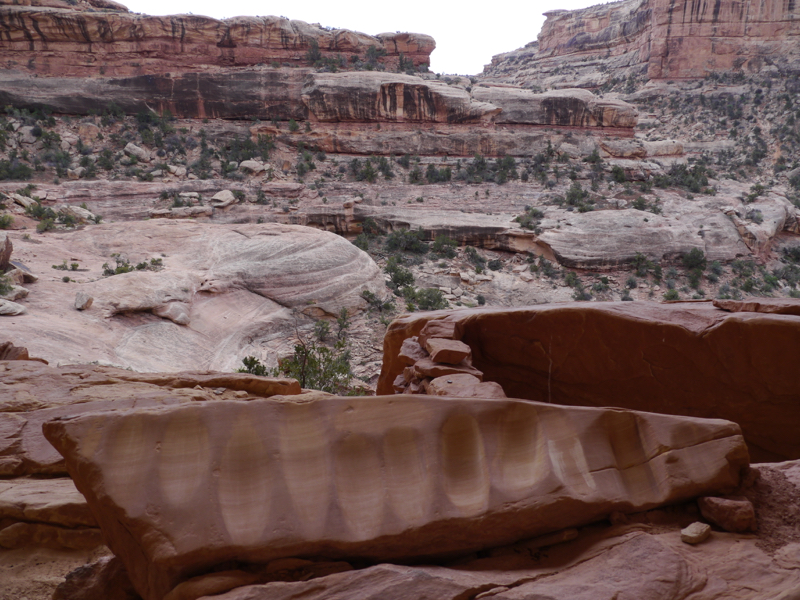 As the day wore on the wind picked up and we wanted to be back at our car.  In our planning we didn’t realize how much more difficult the trail out was than the trail in.  My brother joked that had we done the loop in the opposite direction the trip would have been over after one or two miles because his wife would have cancelled it. 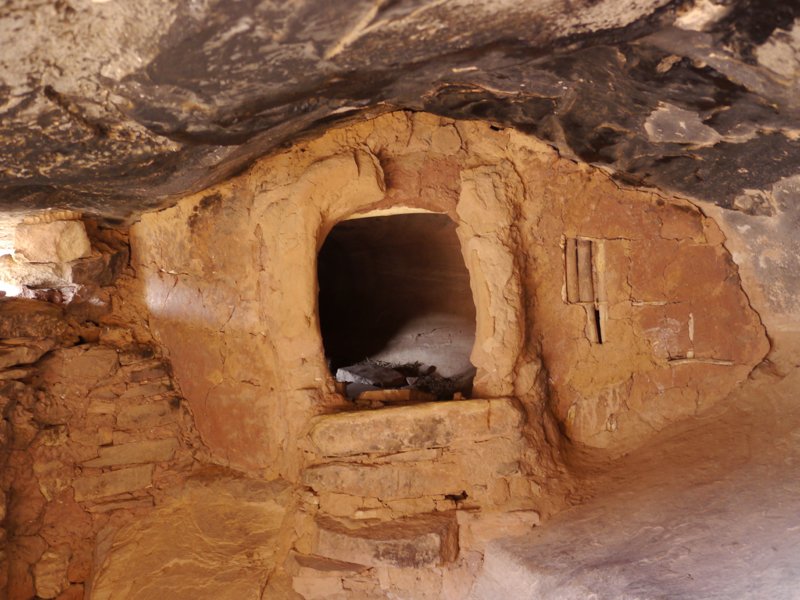 Finally, finally we reached my brother’s car at the top where I piled in with him and drove back to the ranger station where I retrieve our Suburban and brought it back to retrieve my family.  When I found them they were hiding in the lee of the outhouse trying to stay out of the cold wind.  I heard the story of moving a rock where they were sitting to find a scorpion.  They were quite glad when I pulled up with a warm truck.

We really feel victorious when we do something like this.  Albert is getting tougher.  We only had to carry his pack for short periods.  We enjoy the time together.  These trips can be hard.  My foot really hurt for much of the hike and when it didn’t feel better after weeks at home I went to the doctor and was told that I had developed a neuroma.  Thank goodness for cortisone shots.  I think these activities really do help define our family. 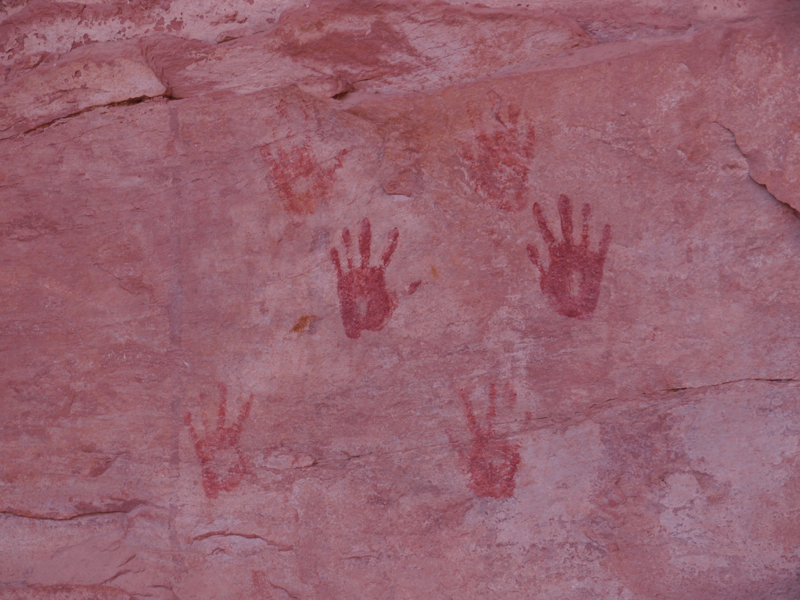