Throughout my life I have returned to Teton National Park to enjoy the wildlife, spectacular scenery and time with family and friends.  When my children were small a favorite outing was to ride the boat across Jenny Lake and then hike past the waterfalls up into Cascade Canyon where we would usually see Moose.  For our return trip in the summer of 2015 our primary objective was higher, the summit of the Middle Teton.

Since our family doesn’t have experience with crampons and ice axes we planned our trip for a time when we wouldn’t have to cross extensive or dangerous snow fields. 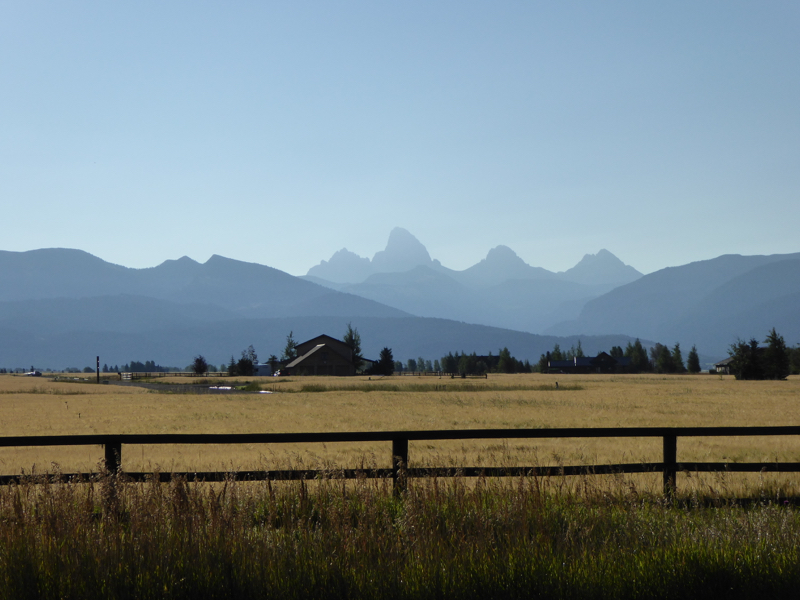 There is a window in August when the high snowfields have usually melted before the early snow storms come and we were hoping to summit during this time.  As our planned trip grew closer we started watching the weather forecast in the Tetons and to our dismay rain was forecast for our anticipated summit day.  Rain by itself could ruin our attempt, but potential electrical storms can be dangerous so we rearranged our schedule to start our climb a day early. 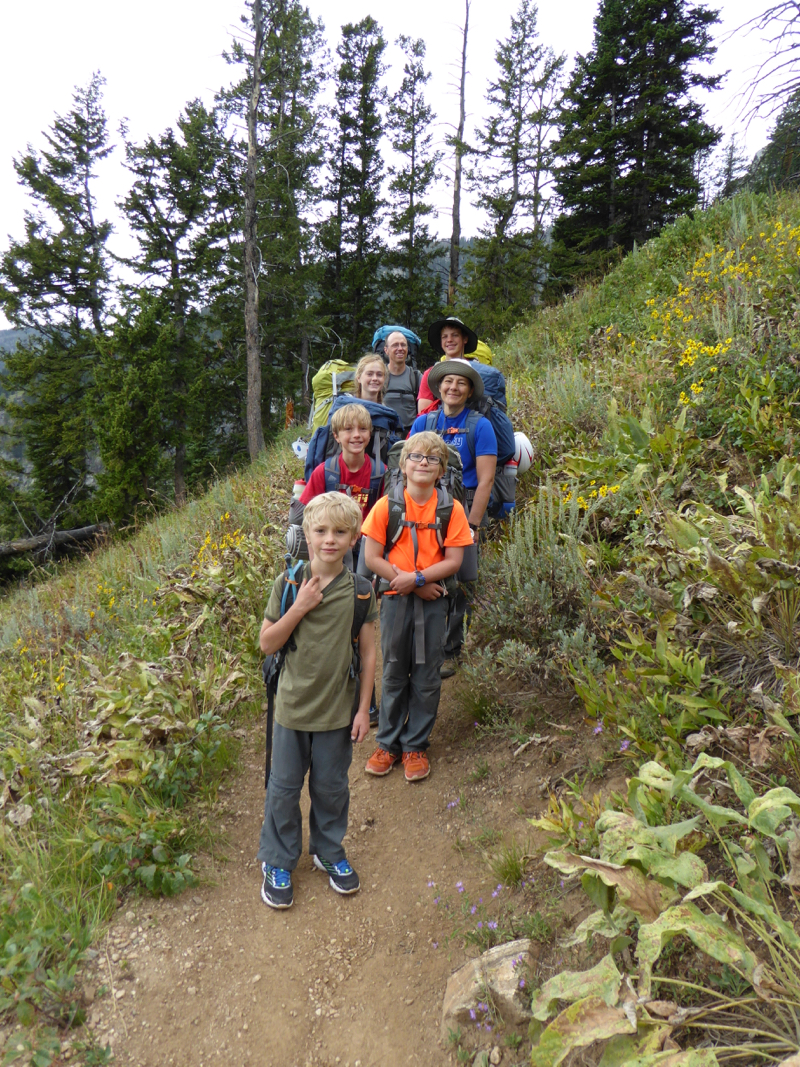 With our young children we also figured it would be best to camp high on the mountain so that the hiking on the summit day would be reasonable for our group.  This meant that we would need to get a backcountry camping permit at the Jenny Lake Ranger Station.  We had hoped to get a spot in Garnet Meadows, a popular camping spot for those climbing the Grand Teton as well as other peaks, but it was already full so we took a reservation at the next higher camp, South Fork. 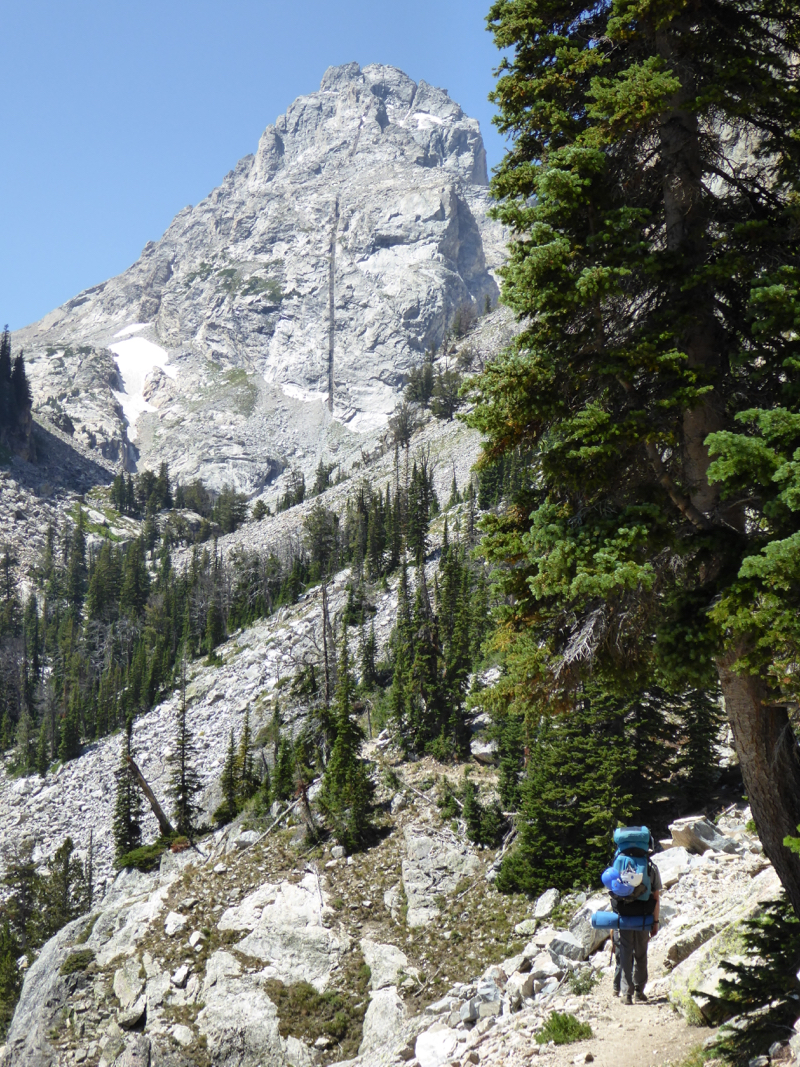 While getting our permit the ranger described the hazards of the hike and recommended that we all wear helmets in the Southwest Couloir because of the loose rock and the many people who would be in that tight, deep, steep gully.  The ranger also supplied us with two bear vaults which are required for food storage in the backcountry.  They look like small plastic kegs and are supposedly bear proof.

Because we had not planned on using climbing helmets we drove back into Jackson and rented the four helmets as we could find and ended up buying three more to cover the seven heads in our party. 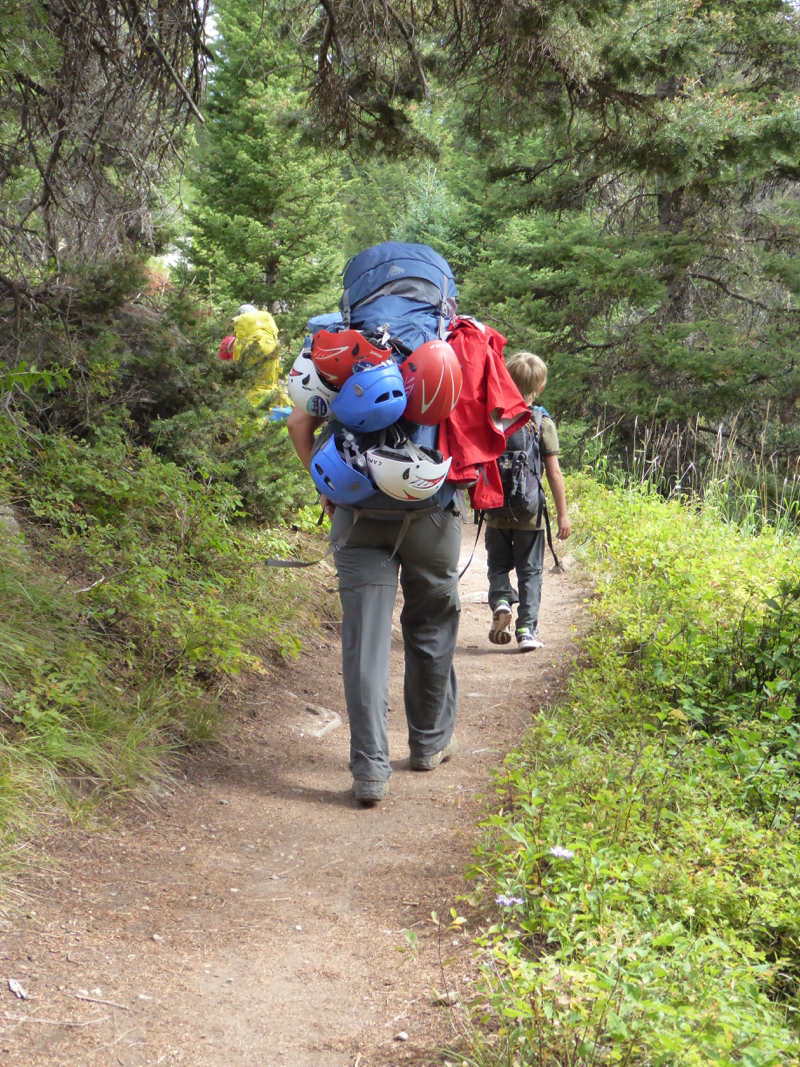 The evening before our hike started we packed our food into the bear vaults.  Everything that we were not going to eat during the first day had to go into the vaults.  It didn’t take long to realize that the volume of food was greater than the space in the vaults, so after smearing Nutella on the bagels we smashed them as flat as we could, turning them into chocolate bagel pizzas.  We opted for Pop Tarts over oatmeal to save cooking time in the mornings. 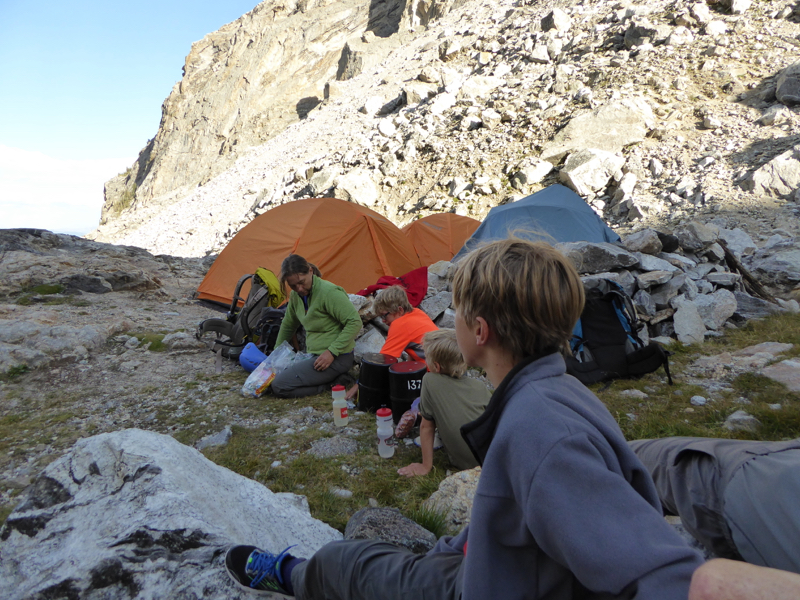 As is often the case for our crew we got started later than we would have liked.  By the time we got to the Lupine Meadows Trailhead the parking lot was overflowing.  Less than two miles into the hike a bunch of people were stopped by the side of the trail watching a bear.  We continued hiking and eventually we got to where the trail ends on the map.  This is about where we had to cross our first boulder field of the trip. 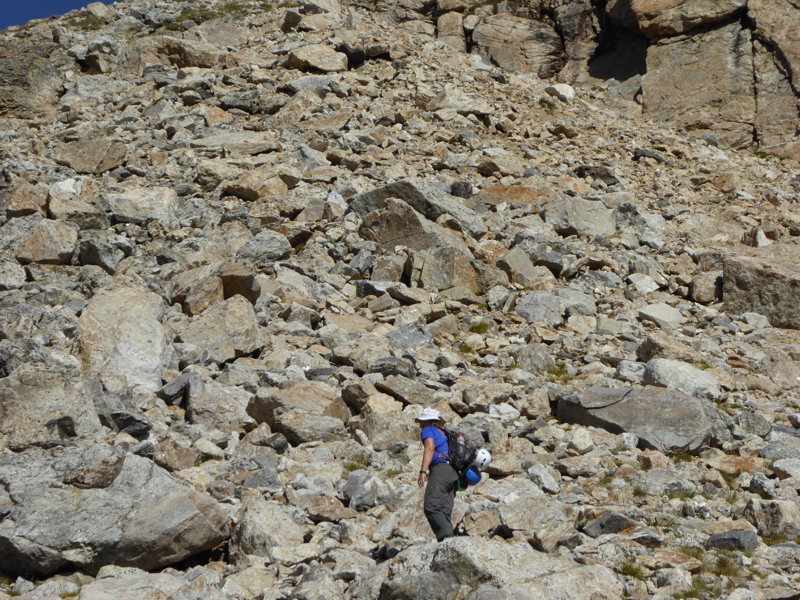 This was also where a guide for the climbing company passed us carrying a propane tank on his back, just like the tanks you see for backyard barbecues.  He explained that years ago the park service had made a “trail” through the boulder field.  He told us to just follow the lower, flat rocks.  It wasn’t obvious at first, but it made sense after talking to him and we made it across our first boulder field.  It wasn’t too long until we passed Garnet Meadows.  It looked like a great place to camp in the willows with many flat campsites.  However, from the photos shown us at the ranger’s station of our destination, we knew we still had a long way to move up the mountain before we would reach our site. 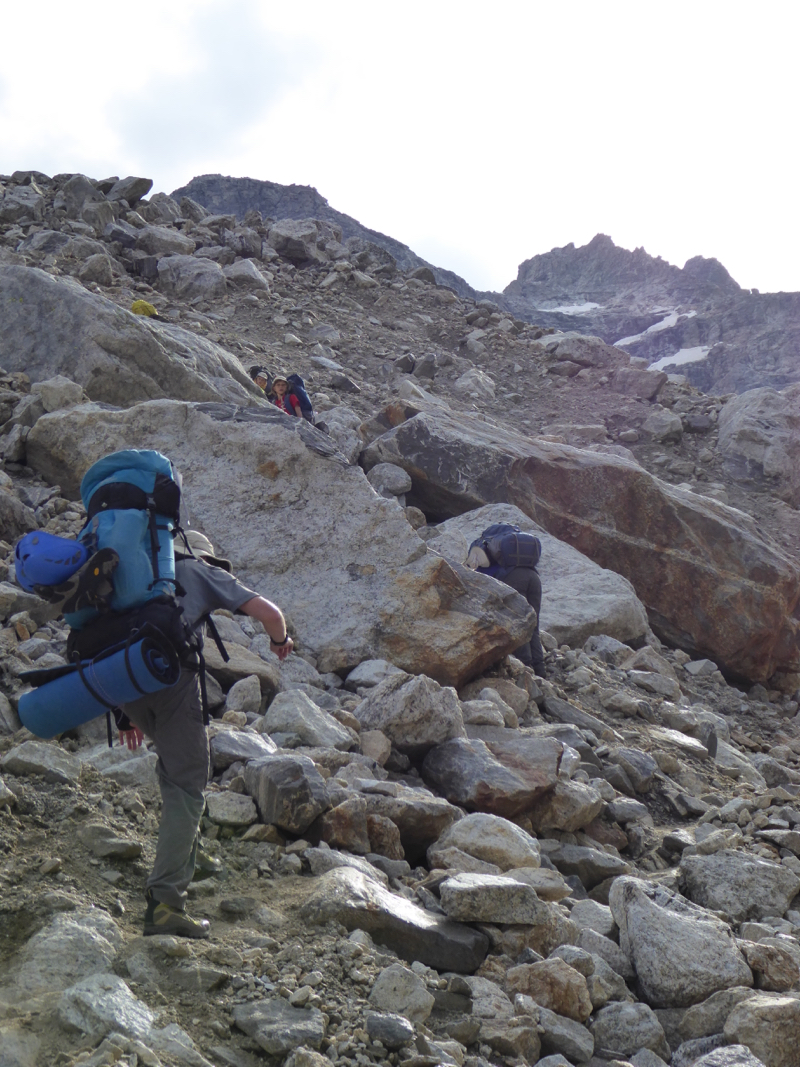 This is where things started to get trickier. We climbed through boulders to the top of an adjacent snow field above which we needed to cross in order to continue up the canyon. Lucy started across with her heavy pack and the ground started to give way under her. With the awful prospect of sliding to the snow and then to the bottom of the slide she started to cry. I yelled at her to stop and hold still as I was trying to get my pack off so I could go out and help her. She kept moving and kept sliding down lower. My yelling couldn't overcome her impulse to continue moving. I finally got to her and we got across to the other side. I shuttled back and forth with our kids as needed and then brought my pack across. That was scary. Not too long after this we saw the first camp site in South Fork. We could barely fit our three tents within the rock wall that had been set up there for protection from the wind. As the rain started we quickly set up our tents. Soon the rain broke and we reconstituted the lasagne that Lucy had made and dried earlier. Funny how after a day like that we eat a whole pan of lasagna, probably twice what we would eat at home. It sure tasted good. 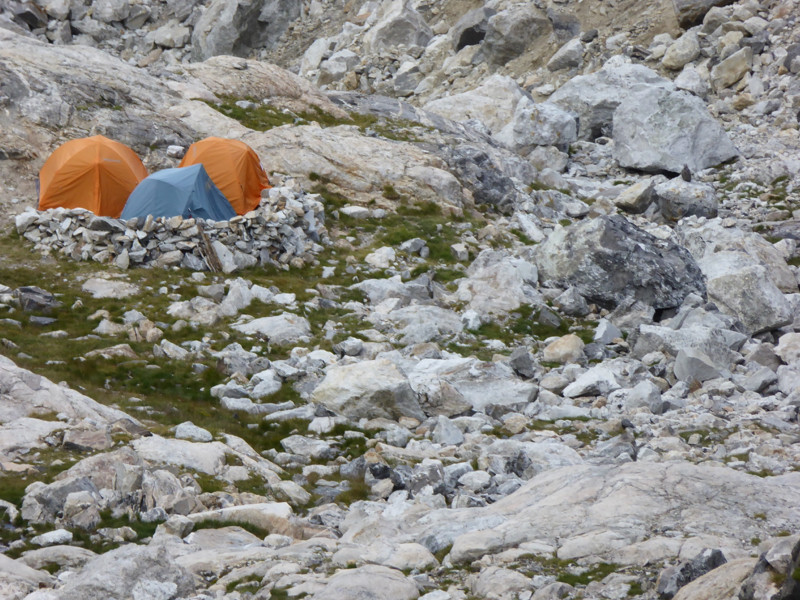 While we weren't too excited about continuing up to South Fork for camp after seeing the lush Garnet Meadows, we sure were happy the next morning to be starting that much higher on the mountain. 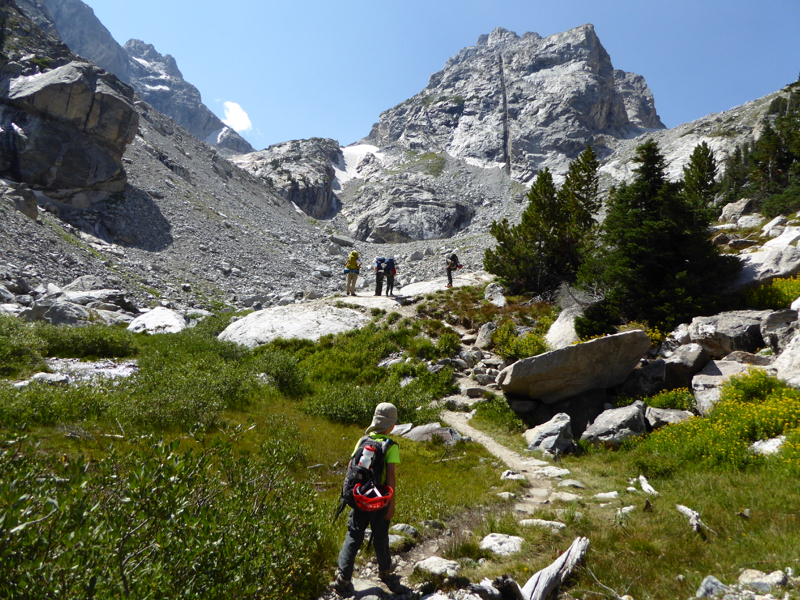 Another benefit for our family was that we had the place to ourselves so the kids could make as much noise as they wanted without bothering anyone. Others hikers that we saw on the trail told us it was about two hours to the saddle from our camp and another two hours to the top. That turned out to be pretty accurate for our group. 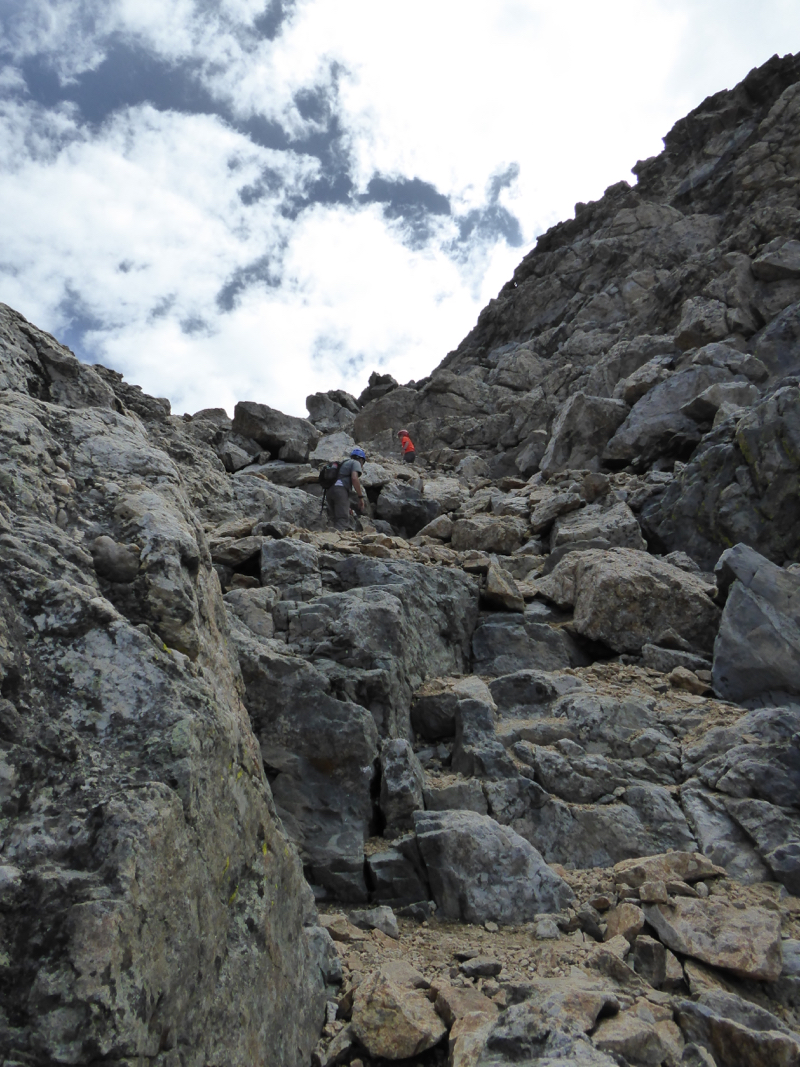 The hiking from camp to the saddle was mostly walking across boulder fields connected by trails through rocky meadows.  When we finally got to the saddle and looked over the edge the view was amazing. The Alaska Basin lay below us with the its lakes and trails. We could also see Table Mountain which Lucy climbed years ago with her mother and others. 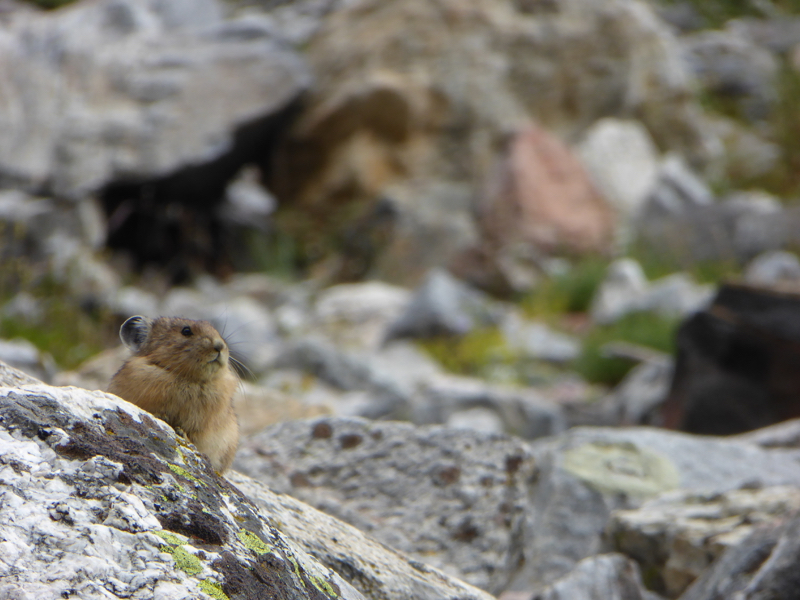 We still had to look up to see our goal, the Middle Teton via the Southwest Couloir.  As things got steeper and there were more loose rocks we put on our helmets and continued upwards. We tried very hard not to knock rocks down on those below us, but this didn't always work and there were periodic yells of “rock.” Fortunately nobody got hurt. 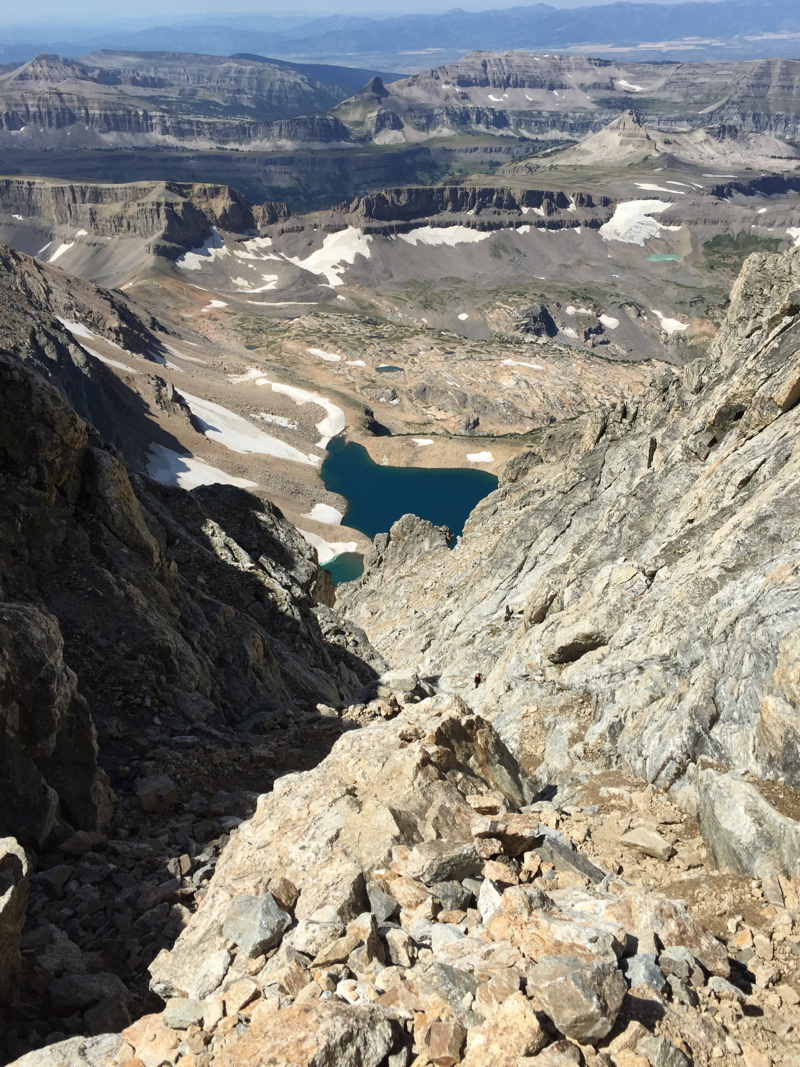 Somewhere along the way Lucy reformulated her training regimen for this hike. Had she known what it was going to be like she would have crawled up and down unstable stairs for half an hour on weekdays and two hours on Saturdays to prepare.  Another joke for the day  was a modified quote from a favorite movie, “I hate all the boulder fields in the whole world.” 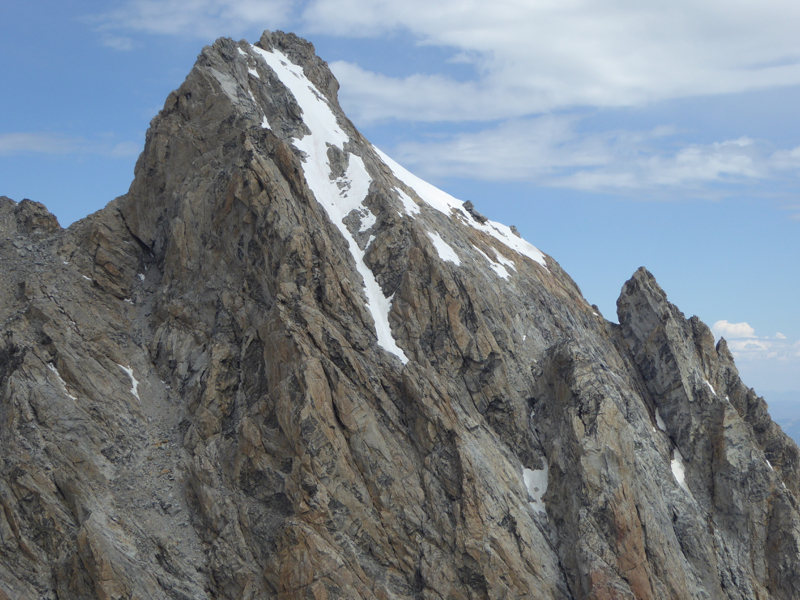 When we left camp we brought jackets for everyone, but as the day warmed and it became clear that we wouldn’t need them.  We ditched our jackets before heading into the couloir.  As promised the couloir was very steep with lots of loose rock.  We were glad to have the helmets and we were glad that we never tested their effectiveness.  After a constant focus on the rock around us we finally made the summit and really enjoyed the views and our lunch.  The Grand Teton didn’t seem to be too far away.  We did share the summit with a few other adventurers before heading back down to the saddle. 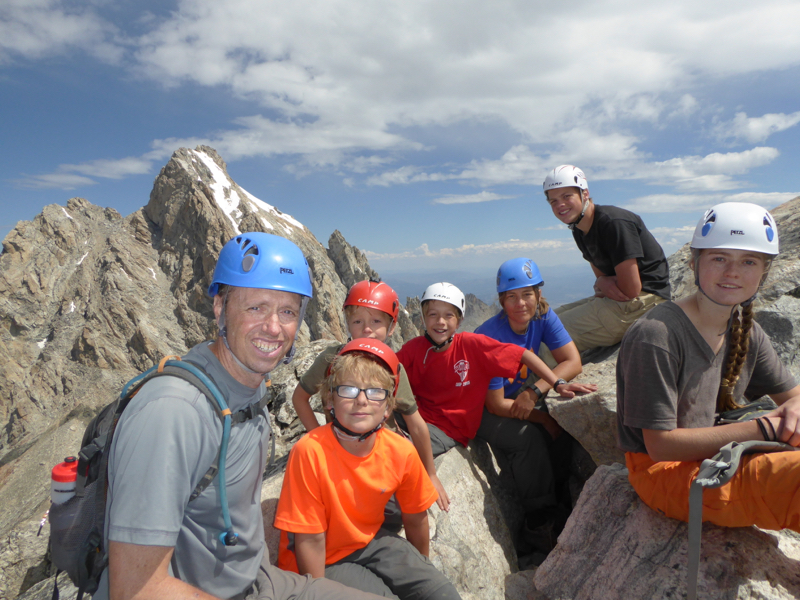 To my surprise  when we got to the saddle Lucy was ready to climb the South Teton.  Albert was not.  He rebelled by sitting down and refusing to move.  I stayed lower on the mountain with the boys while Lucy and Lilly climbed higher.  They reached the ridge where they were able to look down into the drainage south of the South Teton.  I would guess they made it half way from the saddle to the summit before they returned to the saddle. 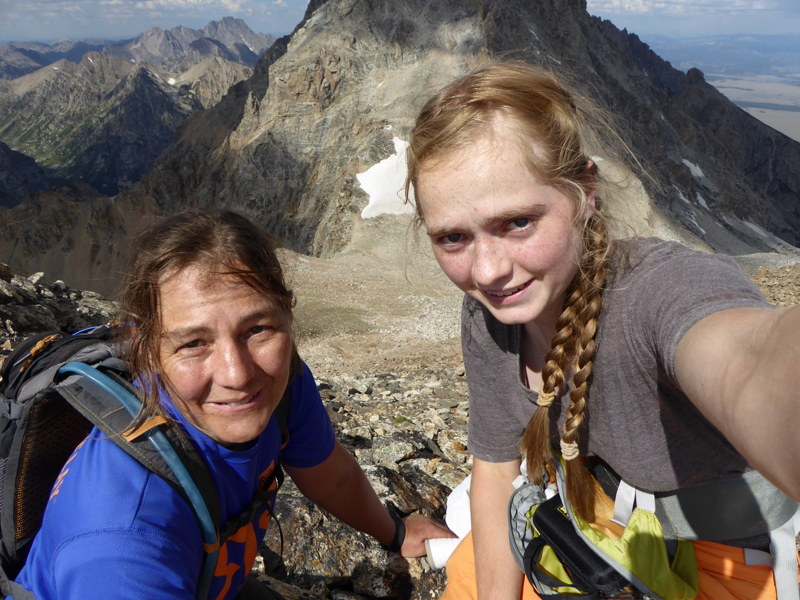 We made our way back to camp where we ate another batch of delicious lasagne.  We were all quite pleased with our accomplishment. 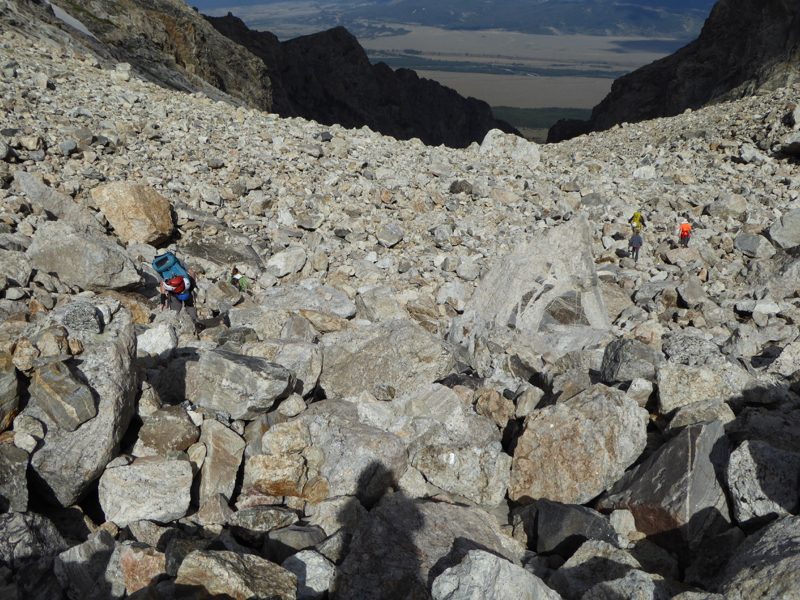 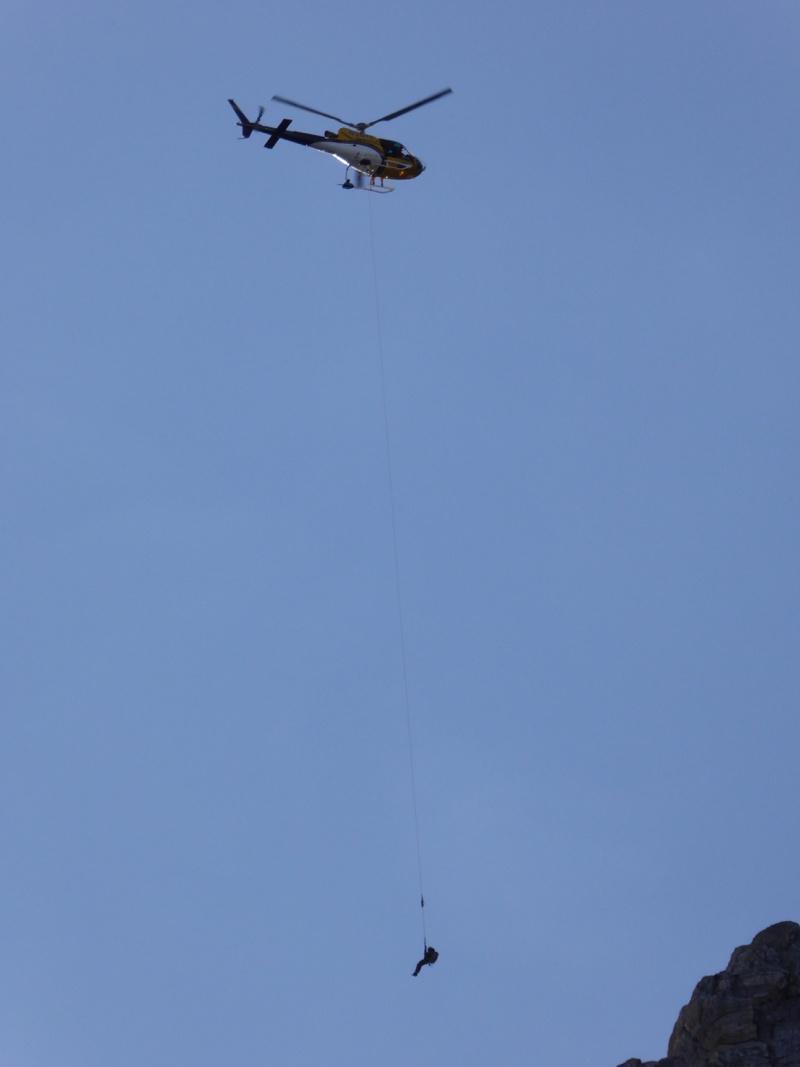 I am still amazed how after these strenuous days of hiking how the boys still get tent energy. They lay down for bed and start wrestling and talking. Just go to sleep boys.

The next morning we got up, ate our Pop Tarts, packed up and headed down the mountain. We avoided the sliding area above the snow field by climbing up and down another boulder field. Two days of hiking climbing down boulder fields with a heavy pack proved quite challenging. We got some rain which made me nervous about slipping and falling which fortunately did not happen. Some of the boulder fields did seem much more difficult to navigate on the way down than on the way up. It was really nice to get back to the normal trail where we could stride out and move quickly towards the car. As we neared the trailhead some of us saw a moose with her calf, a sight which is always impressive. 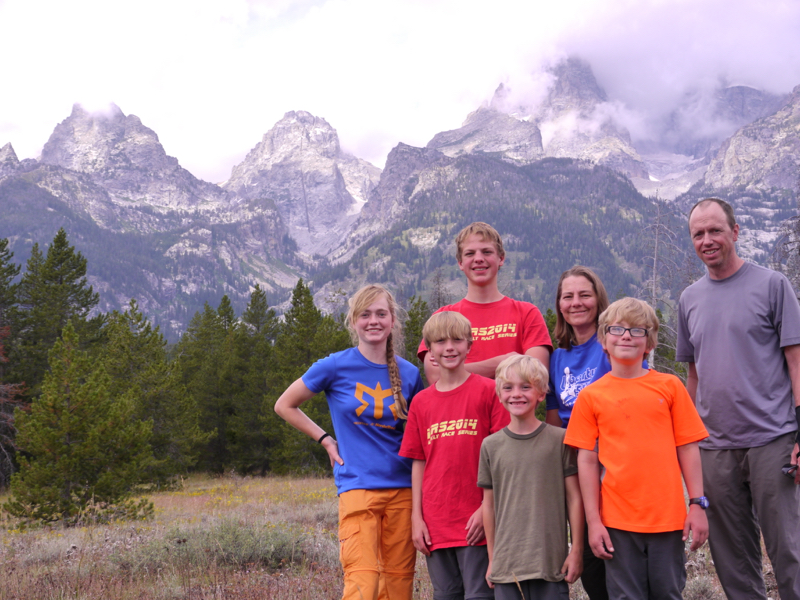 We got to the car, loaded up and drove to the Jenny Lake ranger station to return the bear vaults. We were glad to learn that nobody was seriously injured in the extraction exercise we had seen the night before. We were praying for everyone in that maneuver.

We were pleased with our accomplishment and glad to collect the memory.