Decades ago, in my youth, I read an article which intrigued me about the waterfalls in the southwest corner of Yellowstone.  So when I found myself in eastern Idaho late one summer I decided to drive to the Bechler Meadows Ranger Station in Yellowstone to see what the region had to offer.  After visiting with rangers I asked if the campsite at Dunanda Falls had any openings over the next couple of months.

The ranger assured me that there was no chance for that very popular campsite to be open, but she humored me and pulled up the schedule.  Much to her and my surprise the site was open one week later.  After a quick consult with my wife we secured the reservation and started planning our trip. 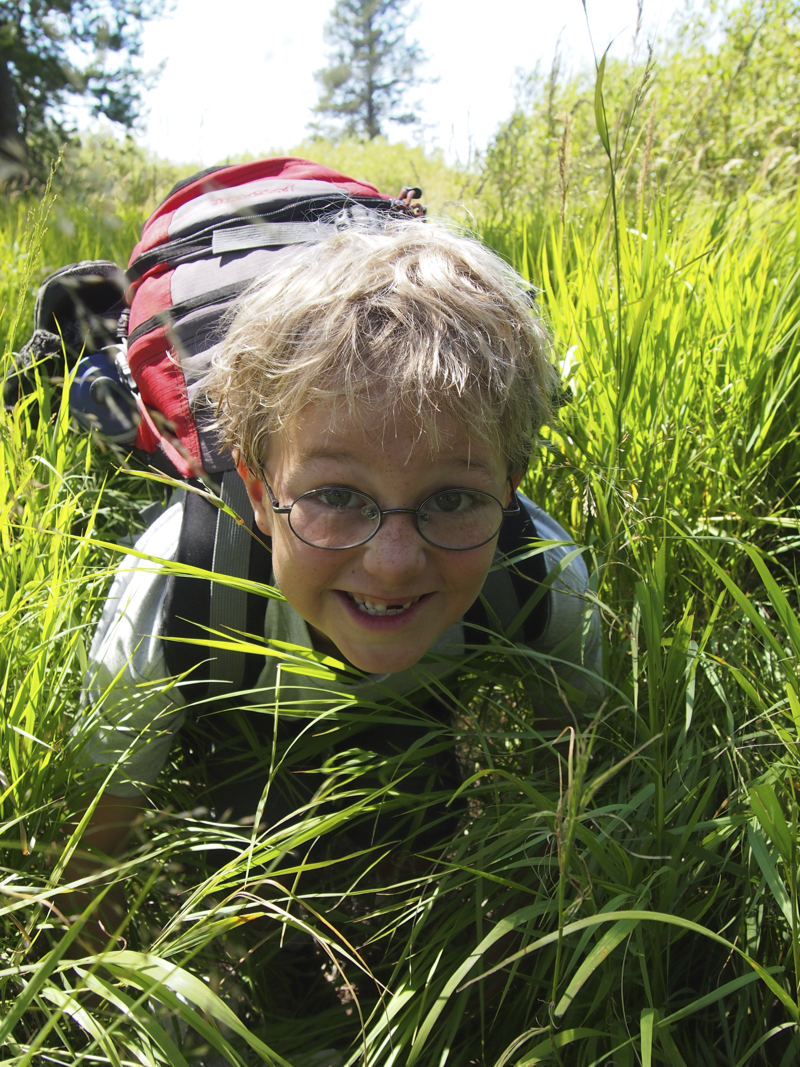 Normally I wouldn’t drive six hours home only to return another six hours for a hike a week later, but from all accounts I had read this was to be a remarkable experience. 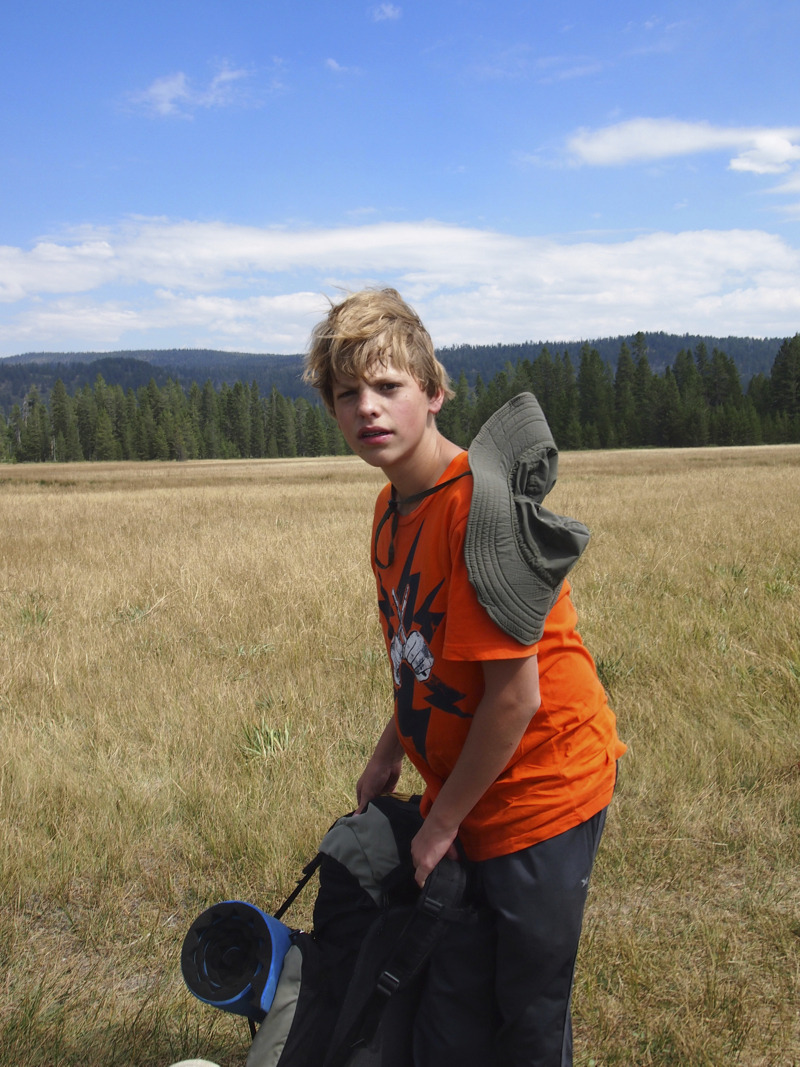 That was reinforced by the ranger who asked us where our reservations were.  We responded that we were staying at the site closest to Dunanda Falls and we were told we were lucky to have the pit toilet with the million dollar view.  Well, what more could we ask for?  We watched the mandatory bear safety video and soon we were off on the trails across Bechler Meadows.  Fortunately the ranger hadn’t told me about the bear maulings that had taken place the night before in other parts of the park. 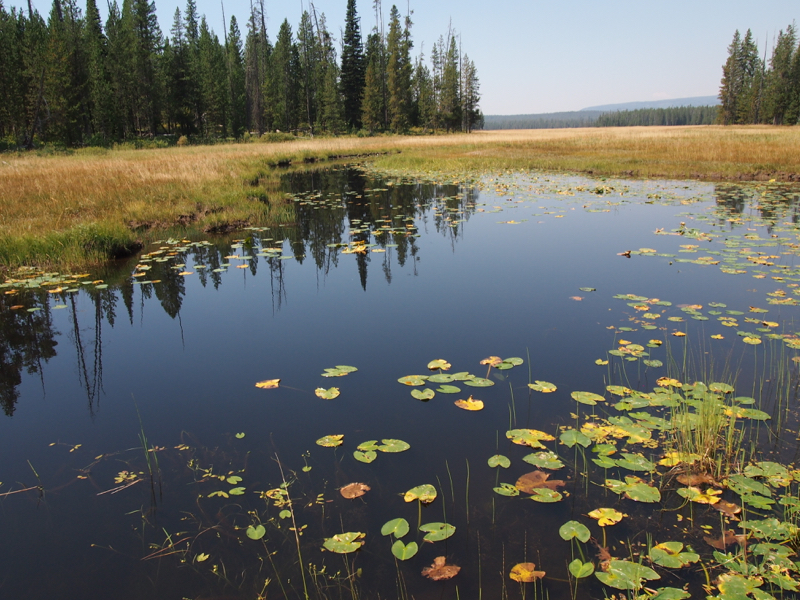 Now I was lucky enough to grow up in Bozeman Montana, roughly ninety miles from both the north and west entrances from Yellowstone.  I was lucky to have visited Yellowstone many times and to have seen many of its wonders.  While I still enjoy seeing Old Faithful erupt and the majestic Lower Falls, if someone asks me what the best thing is to do in Yellowstone I will tell them go swimming.  Dunada Falls are in their own right beautiful falls, but I wouldn’t have spent the twelve hours in the car the following week without the promise of something more.  Photos of Dunanda Falls often include a group of people soaking in a warm spring pool at the base of the falls and this coupled with the beauty of the falls is what I was anticipating. 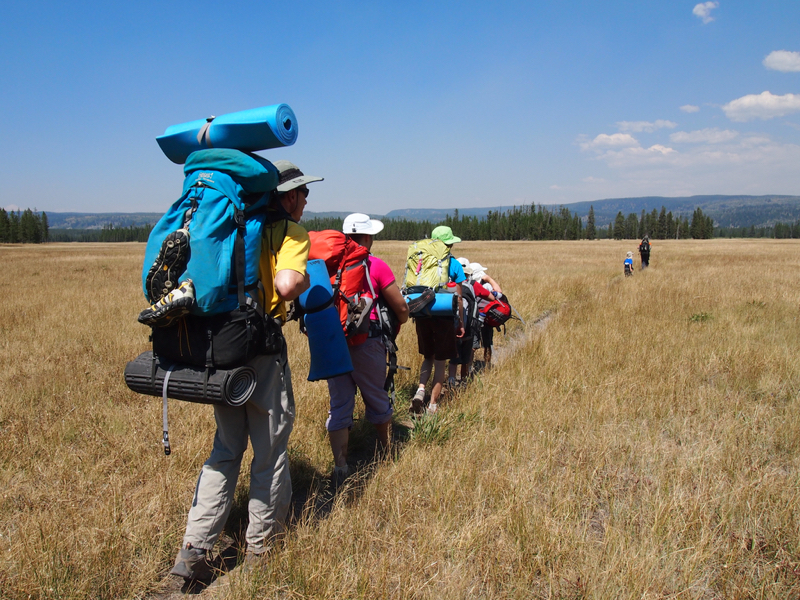 Over the years and many adventures we hadn’t gone backpacking with the entire family because with six kids there was always someone who would need to be carried in addition to the tents, food, clothing and and other equipment.  Now that our youngest was seven and a pretty good hiker we had an opportunity to do a family trip.  Well it turns out that he was a pretty good hiker, but even a light backpack was difficult for him and before long Lucy was carrying his backpack.  Fortunately the trail across Beckler meadows is really flat and my older children were strong enough to carry substantial packs so we were still able to make good time. 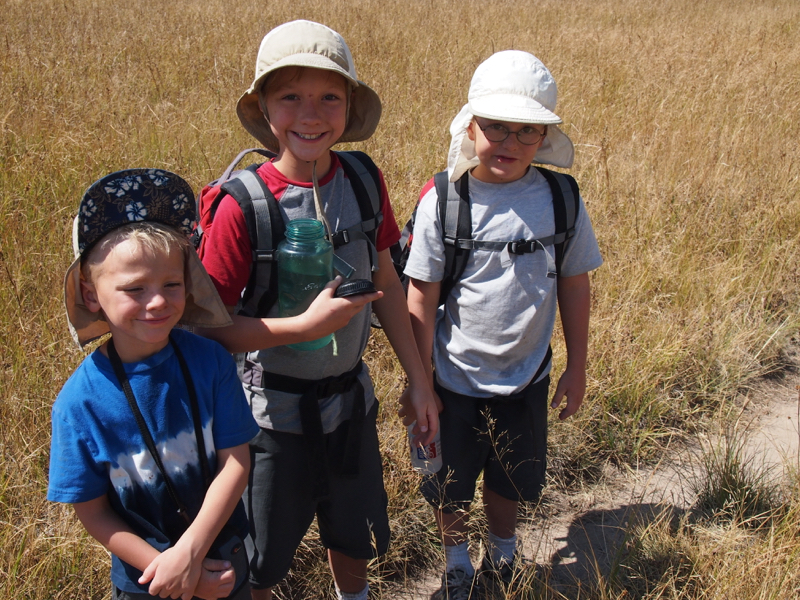 Bechler Meadows are some of the largest mountain meadows I have ever seen.  The large expanse of tall grass is occasionally divided by streams lined by willows and occasional high spots punctuate the area with evergreens. 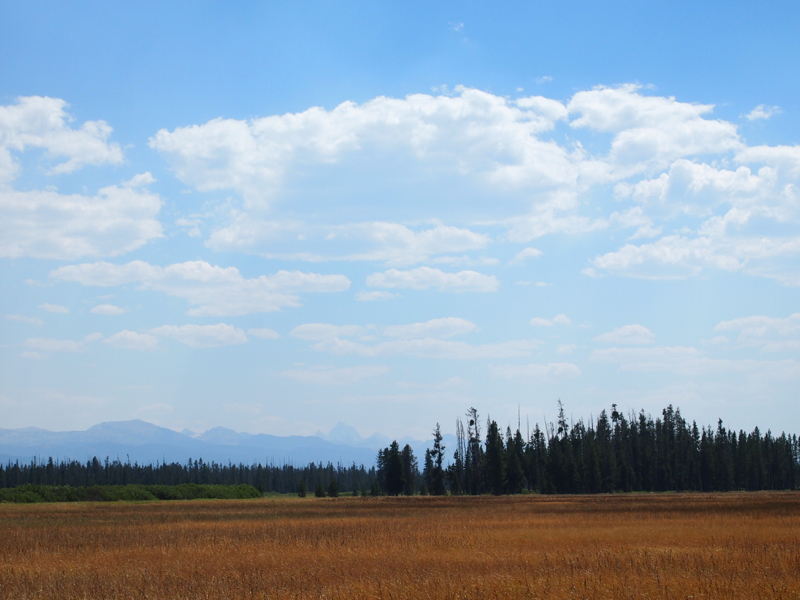 To the southeast the Teton Mountains rise majestically.  Whenever we entered the willows we made lots of noise, which is a pretty normal condition for our family, to be sure any bears that we imagined could be hiding there would hear us coming with plenty of warning. 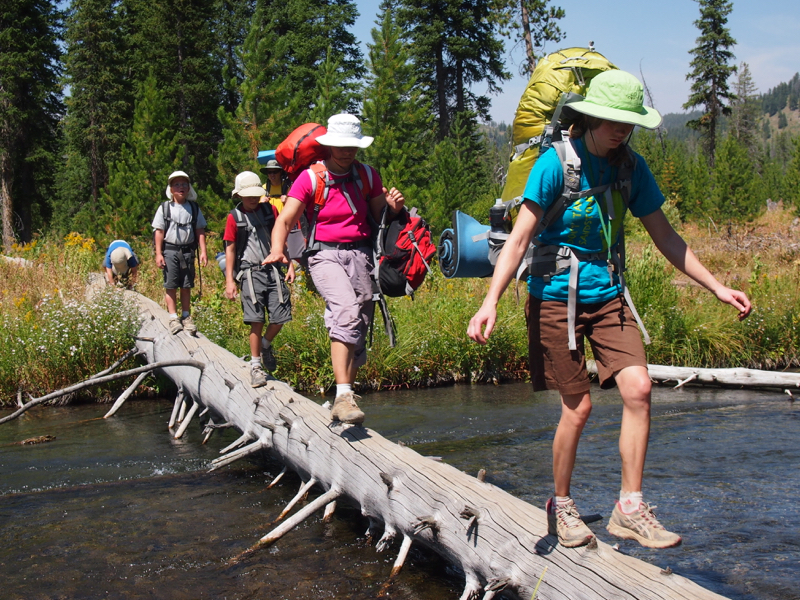 The stream or slough crossings were accomplished in some cases by walking across logs, simply walking through the water or by crossing a small suspension bridge. 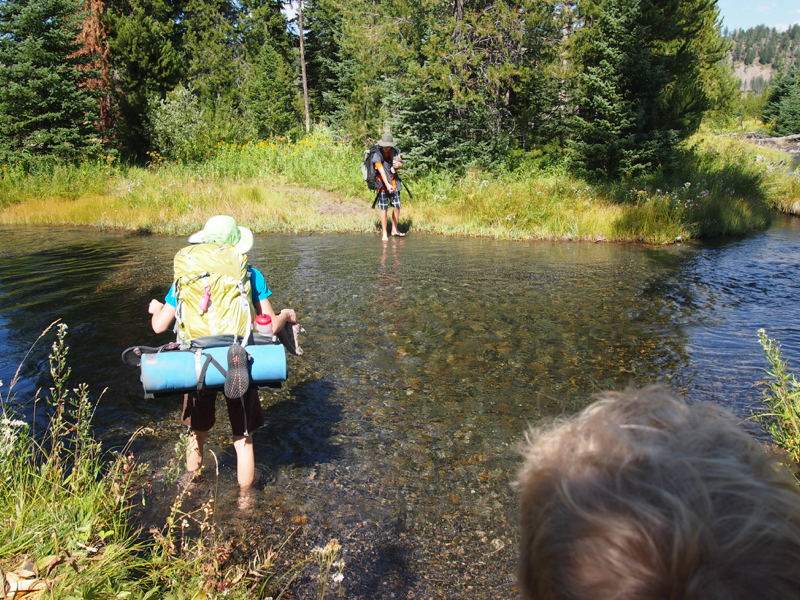 At least once a stream crossing turned into a swimming break which reinforced my assertion that the best reason to go to Yellowstone is to go swimming. 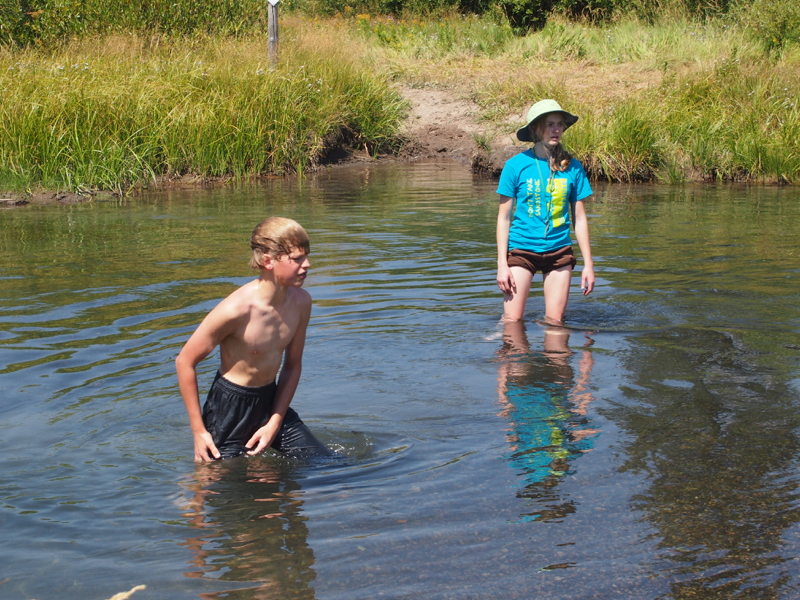 Of course these adventures are not only about the destination, but also about the many unplanned and unanticipated events along the way.  When we were nearing lunch, which was to be Nutella bagels, we came across an abundant huckleberry patch.  Few things in life make Lucy as happy as finding lots of plump, juicy huckleberries.  While the chocolaty goodness of Nutella on bagels is something we all enjoy, Nutella with huckleberries on bagels rates as a backcountry delicacy, a sublime treat.  Of course we had time to stop and raid the bear’s pantry. 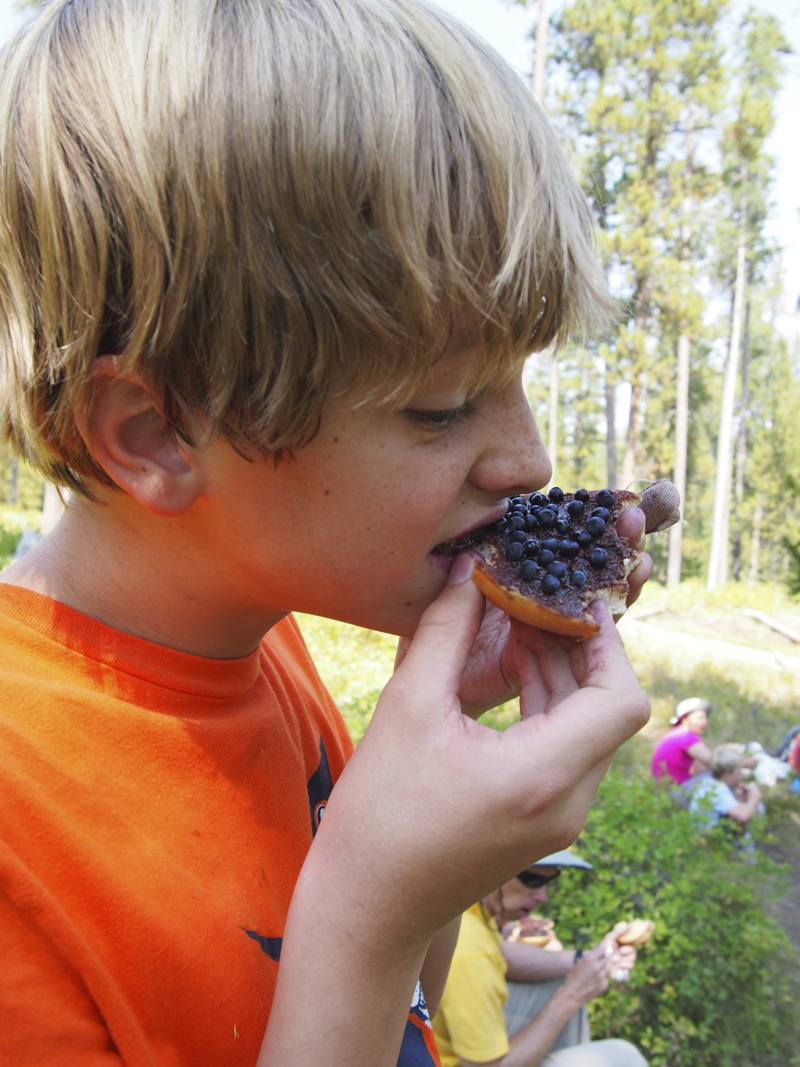 As we neared the falls the trail left the valley floor and started to climb.  It was on this climb, shortly before our campsite that we came across a man with a few kids who while talking to me out of earshot of the children asked me if I had heard about the bear attacks.  I tried to blow off his statements, assuming he was just trying to scare me in the backcountry.  I didn’t appreciate it.  I thought the rangers surely would have informed me if there had been attacks, but it left me a bit on edge. 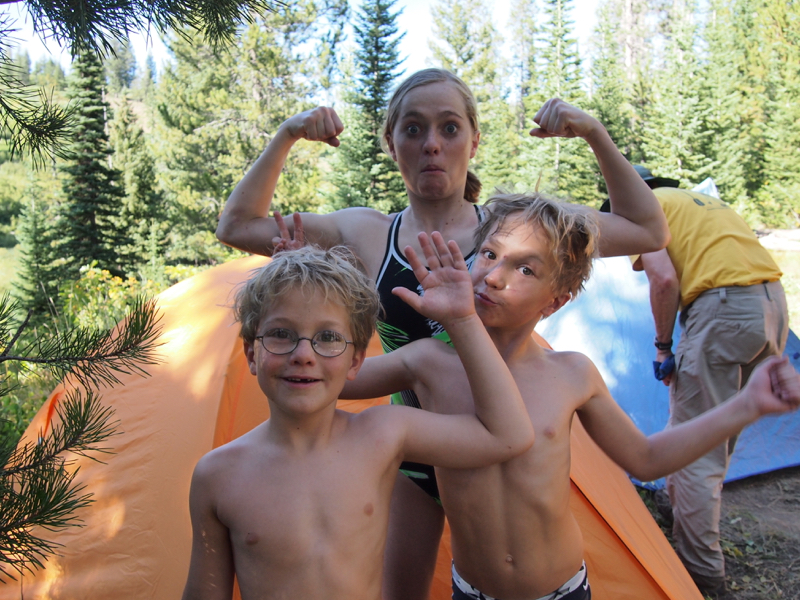 We got to our campsite and found places for our tents, the horizontal pole tied between two trees that was to be used for suspending our food out of the reach of any animals (bears) and a sign pointing the way to the toilet. 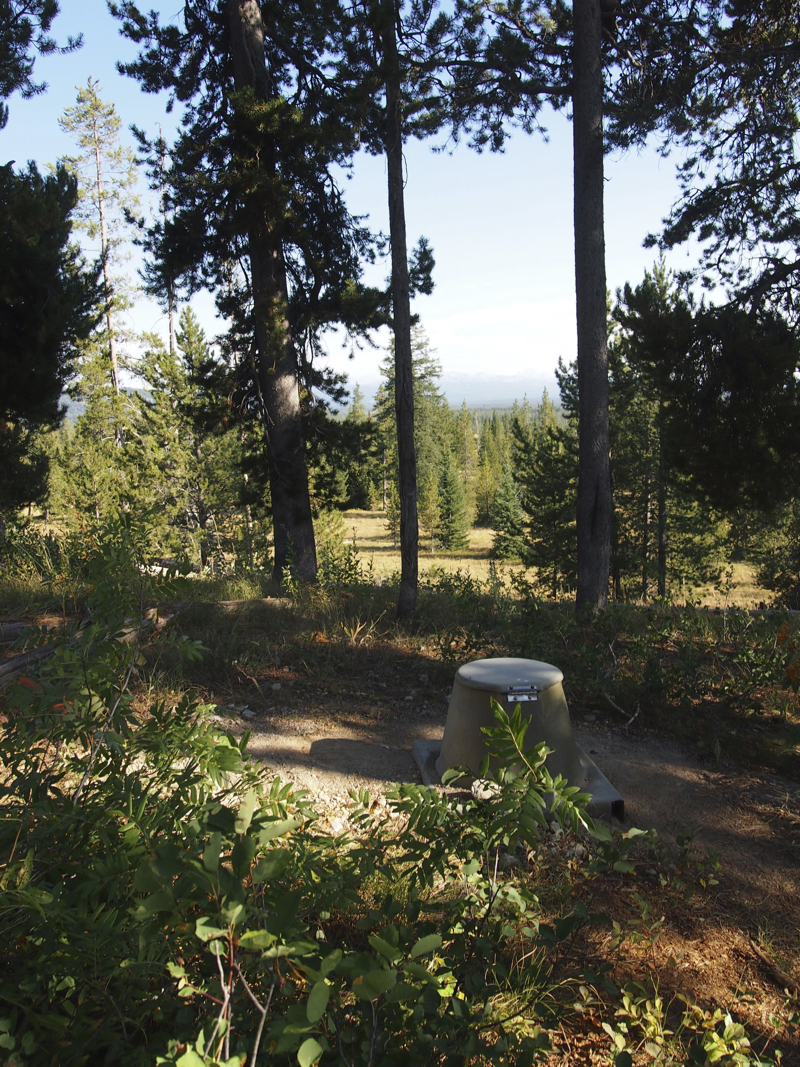 Of course after the review we had received of the toilet we were anxious to check it out.  It didn’t disappoint.  We walked up and over a hill in the pines and there it was.  It was similar to many other backcountry pit toilets except that there was no building around the toilet, just the concrete pit with the toilet on top, no walls. 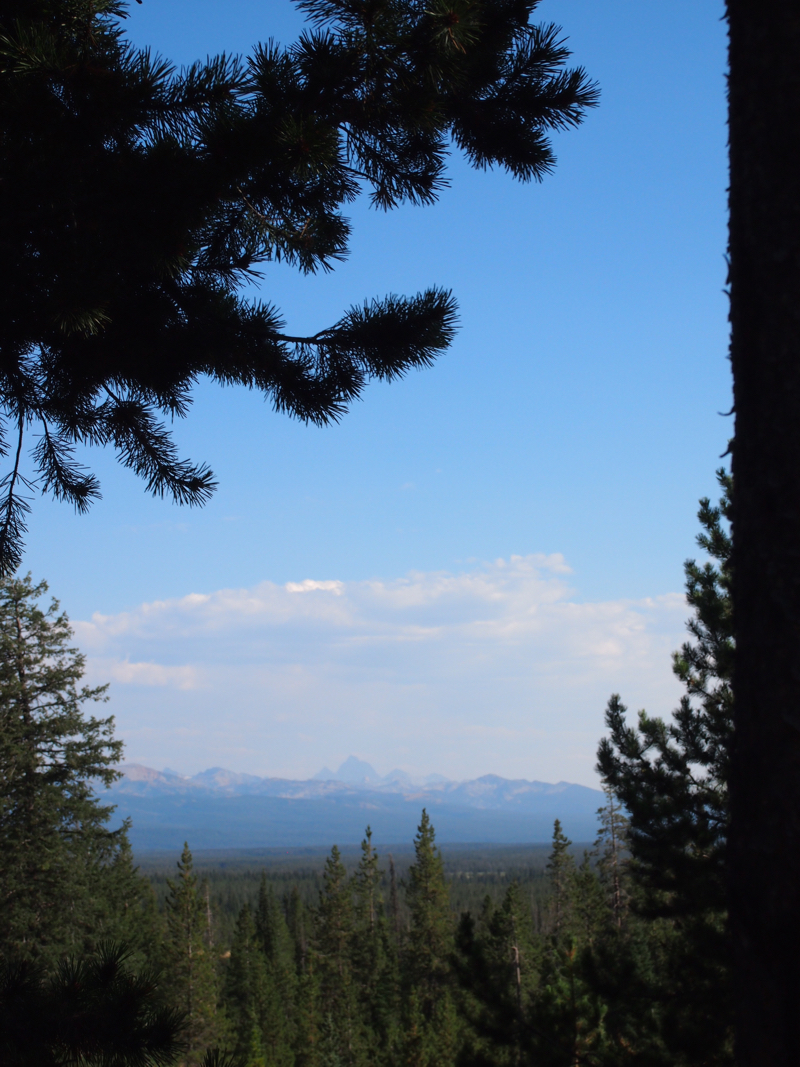 When sitting on the can one looks through the pines onto the meadows below with the Tetons rising in the distance.  It truly was the most spectacular view I have ever had sitting on a pit toilet, or any toilet for that matter. 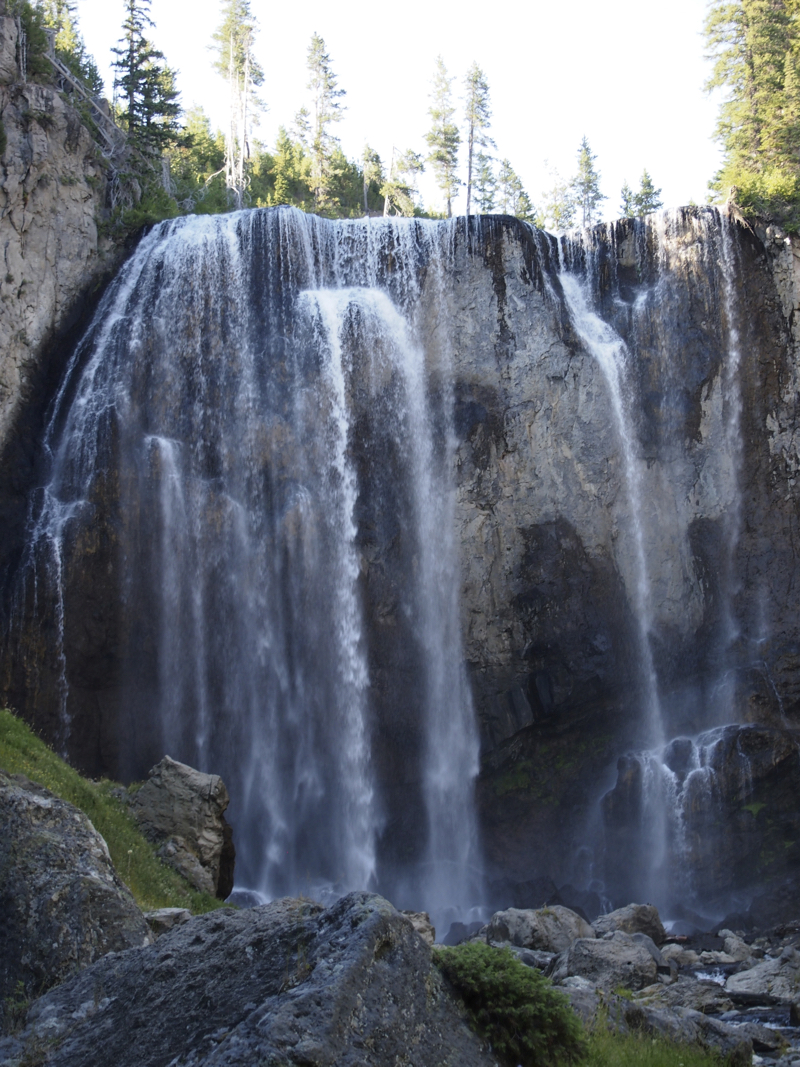 After taking account of our surroundings we set up camp and then headed down to the river for a swim.  The canyon surpassed the high expectations that had been set from the photos.  We dropped down to the stream and found hot water bubbling into the stream on both sides as we worked our way upstream to the falls. 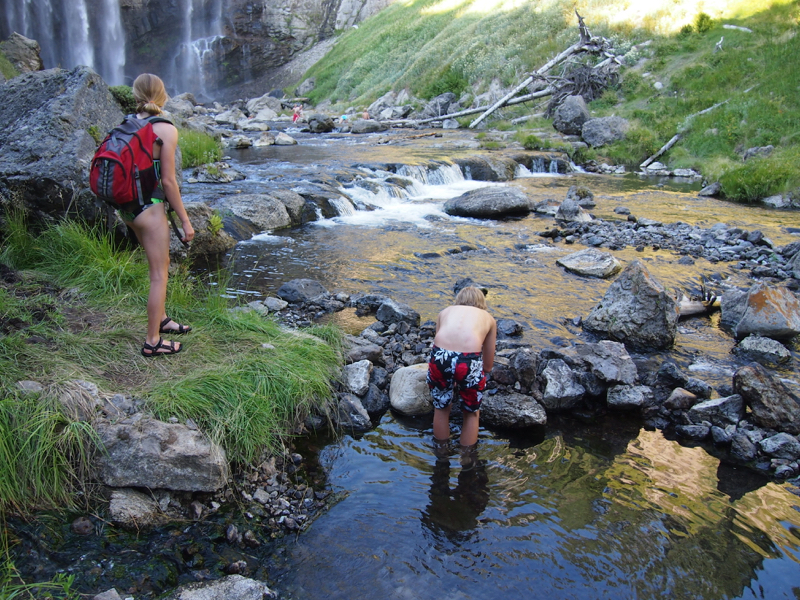 We would sit in one pool in the stream for a bit and then move our way upstream to another pool.  Before long we could see the falls which are pretty impressive, about one-hundred-fifty feet tall.  While we were relaxing in the water a group of boy scouts dropped into the canyon and walked behind the falls. 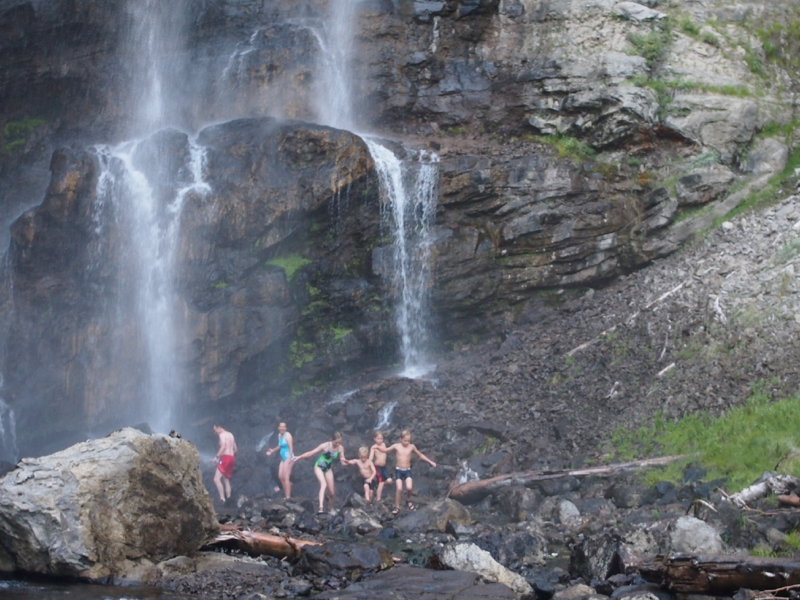 Of course our group had to try walking behind the falls which elicited lots of yelling as the cold water beat on our backs.  I preferred sitting in pools closest to the falls so that my body was warmed by the hot spring water as my face and shoulders were cooled by the mist coming off the falls.  It was easy to find just the right temperature. 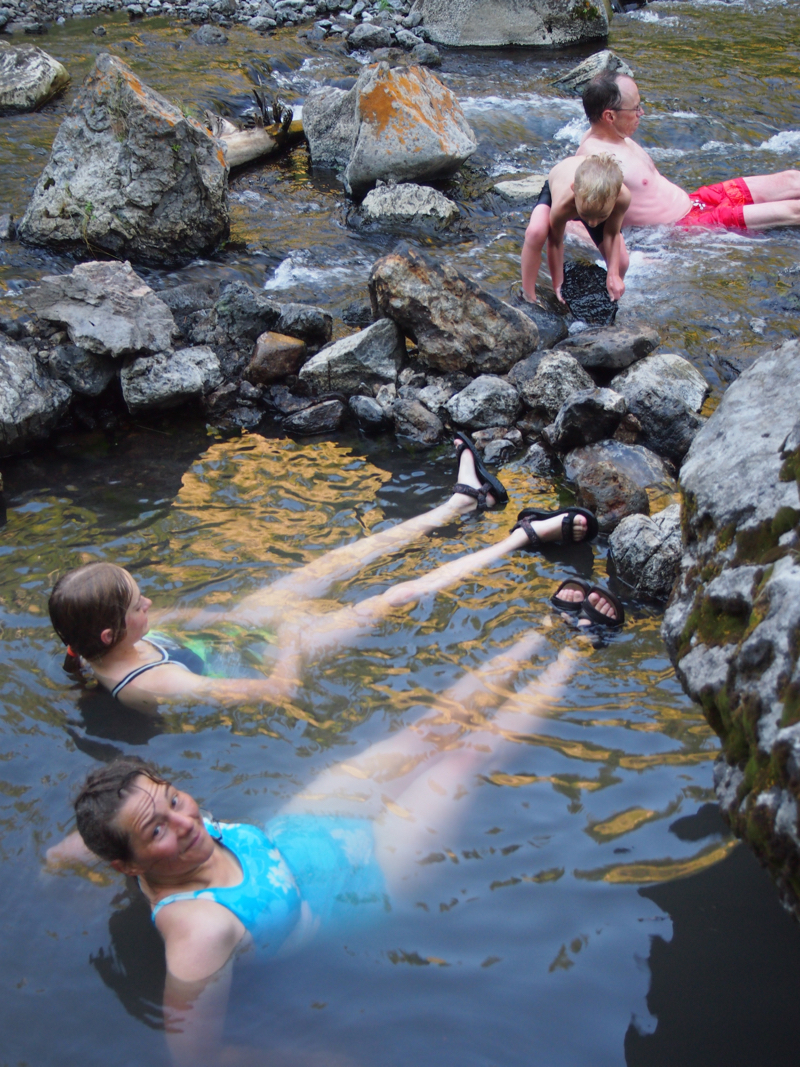 As the sun started to fade we went back to camp and cooked our lasagna soup for dinner. 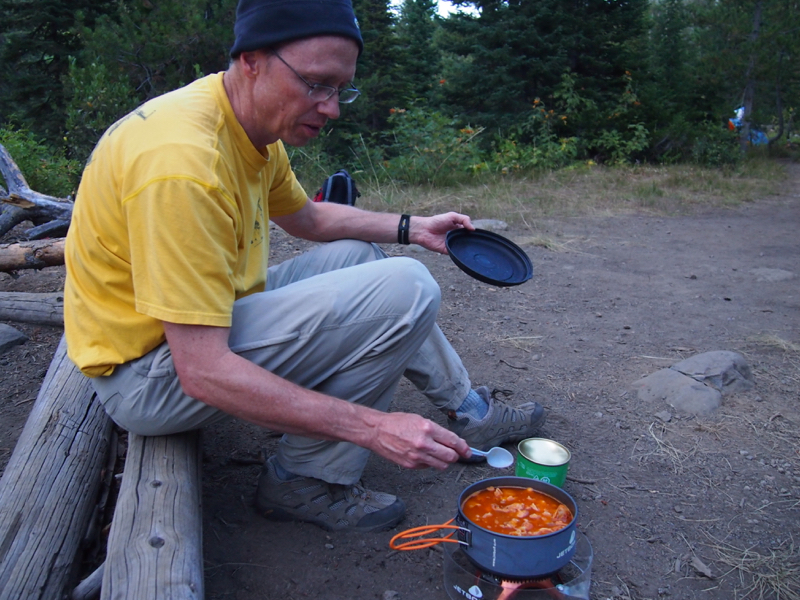 We hung all our food up on the trees, out of the reach of bears and went to sleep. 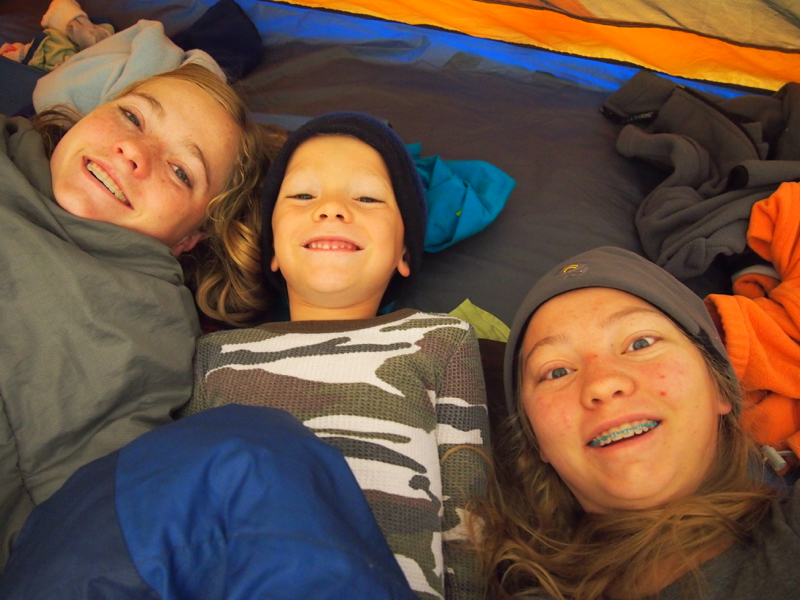 In the morning we hiked over to the adjacent cascade, but we managed to take a wrong trail which added a mile or more to our hiking that day.  We returned to camp because we just had to get another soak in before leaving this wondrous place.  After talking with a man we met along the way we opted for a different trail on the way out.  It would be a little longer, but wouldn’t require a river crossing.  It did have a pretty cool suspension bridge though. 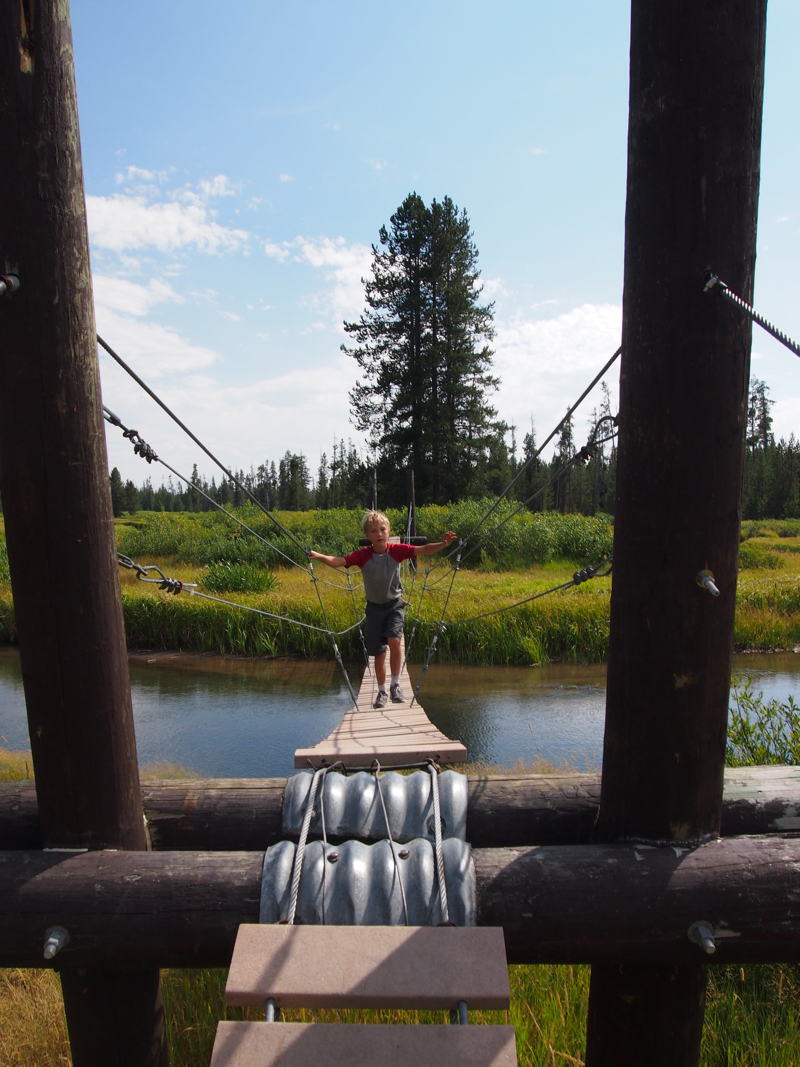 On the way out we did bump into more people on the trail.  One group had about a dozen people and about twenty pack horses and mules. 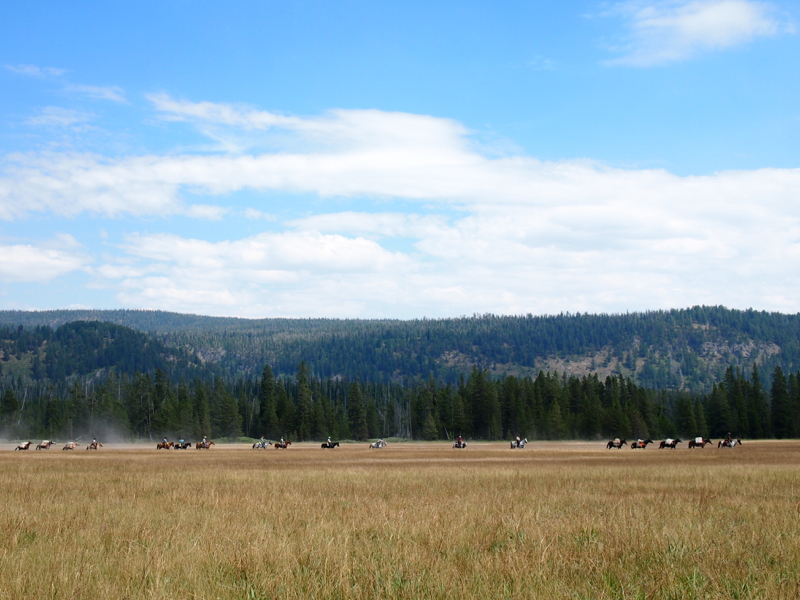 I imagine that could be an enjoyable way to explore the region.  Albert really would have liked a horse to ride.  He was so tired that he cried softly for the final two miles of the hike.  Such is the life of the youngest member of our family.  You get amazing adventures, but they can be darn hard. 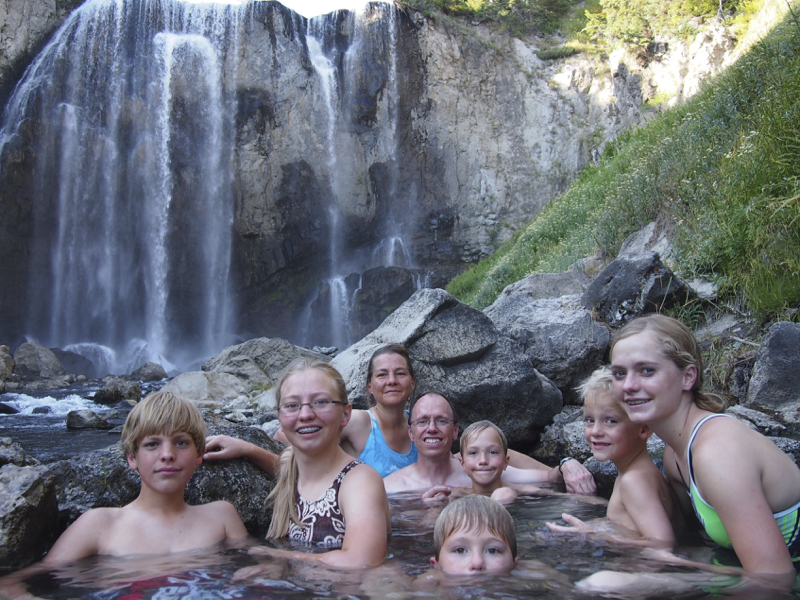