Since neither I nor any member of my family was capable of riding the 100 miles of the White Rim Trail on his or her bike in a single day we decided to spread the fun over four days of riding.  To make things even better our adventuring neighbors agreed to come along for the fun. I had been to Canyonlands National Park before and was impressed by Mesa Arch, but I hadn’t yet learned the charms of Canyonlands National Park.

Reservations for the campsites along the White Rim Trail disappear months in advance, especially for the coveted spring and fall seasons.  Of course there is the normal planning for a four day camping trip, but there are a few other issues like bringing enough water for fifteen people in our group. 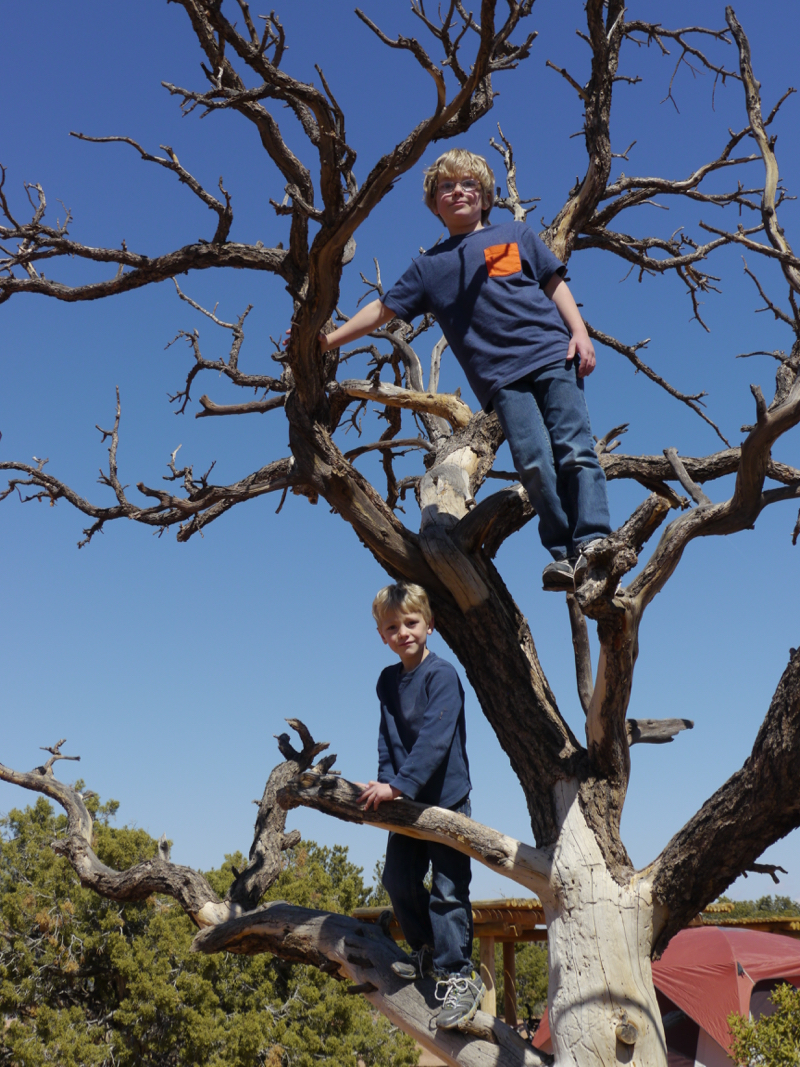 And how do we get the eight people in our family to Moab and beyond with all that water, our bikes and camping gear? Our solution was to drive our van as well as our Suburban to the start of the ride and then just use the Suburban for a support vehicle.  Our friends had a similar solution. 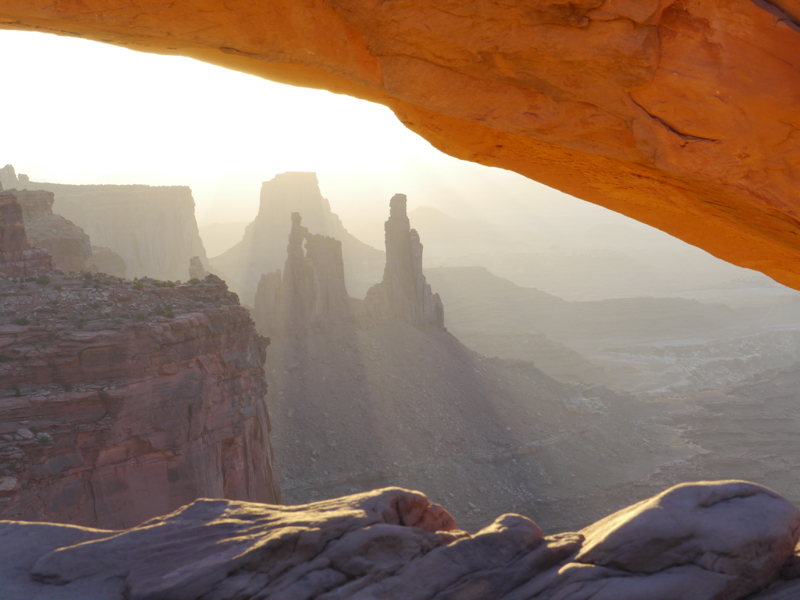 Mesa Arch at sunrise truly is a spectacular site, perhaps my favorite arch, so, of course we started our first day of riding by watching the sun rise behind Mesa Arch, lighting the cliff below the arch which reflects light onto the bottom of the arch, causing it to glow in a manner I haven’t seen elsewhere.  This phenomenon is unique enough that tour busses will show up before dawn so if you have only a few photographers when you make the visit, be glad for your good luck. 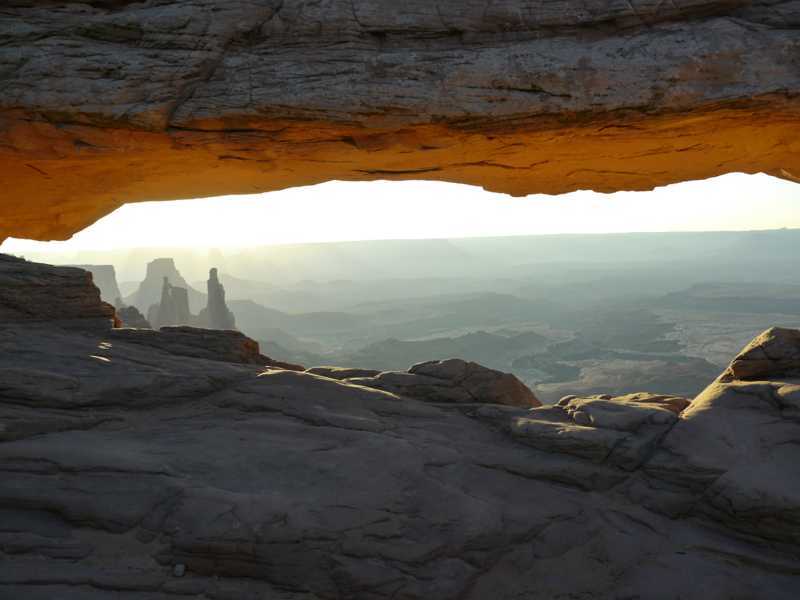 We left the van outside the national park at a parking place where the White Rim Trail meets the main road which goes into the park.  The cyclists rode from Mesa Arch to the top Shafer Trail and then started down. It is a little scary looking down this road from the top and there were some worries about our kids keeping their bikes under control while riding down this twisting road.  Albert had just started using a bike with gears so we were particularly concerned about him. No more pedal brakes. In fact looking down the road was scary enough that Lucy insisted that I drive the Suburban to the bottom. 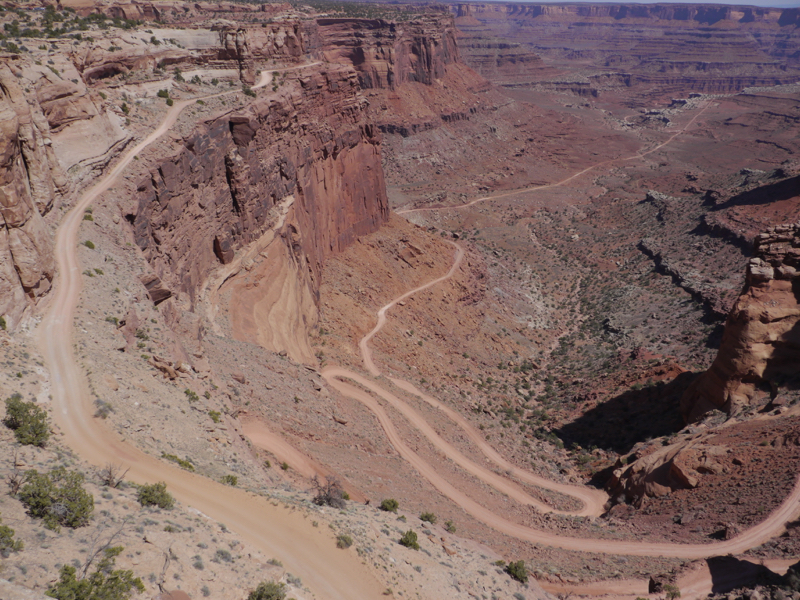 Our youngest was six at the time and we figured we could throw him and his bike in the Suburban whenever he got too tired to ride.  Of course the descent was fun and fast, and the kids kept it under control. 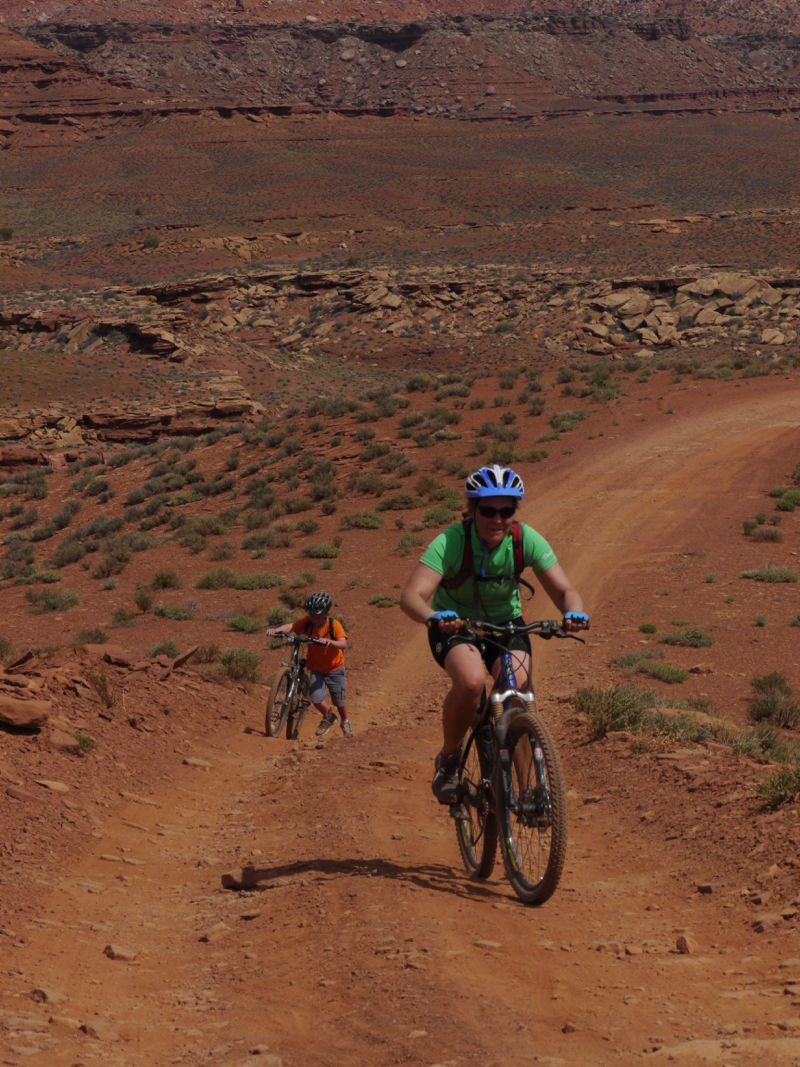 My wife and I agreed to split driving responsibilities along the route, but it didn’t quite work out as I had anticipated.  The passes along the way are very steep and somewhat scary. Lucy felt safer on her bike on these roads than driving our Suburban.  Lucy and I both bumped our heads on the ceiling of the truck while driving, not because of bumps in the road but because we were pulling ourselves up on the steering wheel, trying to see over the hood when the road would break over a hill.  At one point I couldn’t see the road as the truck crested a hill. Fortunately I stopped, set the parking brake and got out to see that the road took an abrupt right turn. Had I proceeded I would have met my demise. I ended riding my bike on the flats and driving the Suburban over the passes. 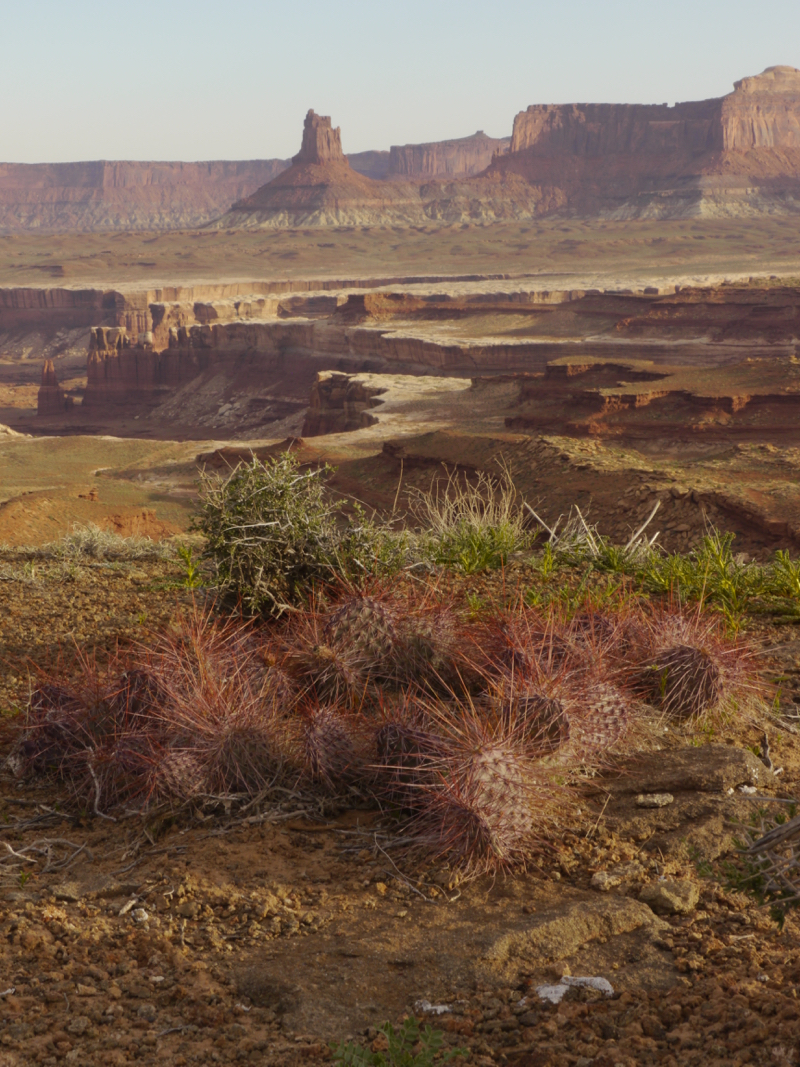 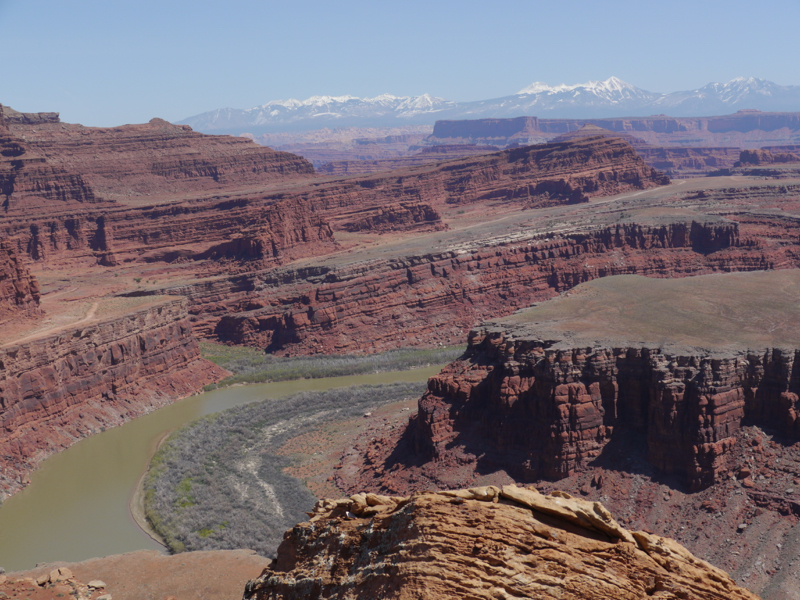 Our oldest daughter Barb had things go differently than planned too.  She is a strong rider who found her way onto the podium during her years of high school mountain biking.  Her siblings were not up to her speed. As is the case with Barb, she made the best of the situation and taught Albert attack position on his bike as they rode together.  As a result his riding was much better by the end of the trip. 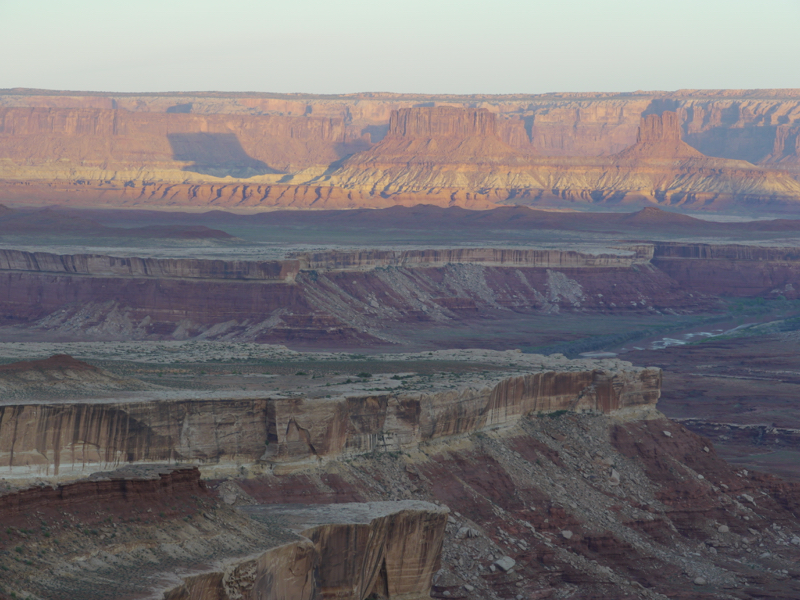 It was good to have a generally downhill day for the first day.  It let us all settle into the adventure and the riding. The scenery was beautiful along the way.  I really liked the Colorado River overlooks. Eventually we got to our campsite, Airport B. All our campsites were good throughout the trip. 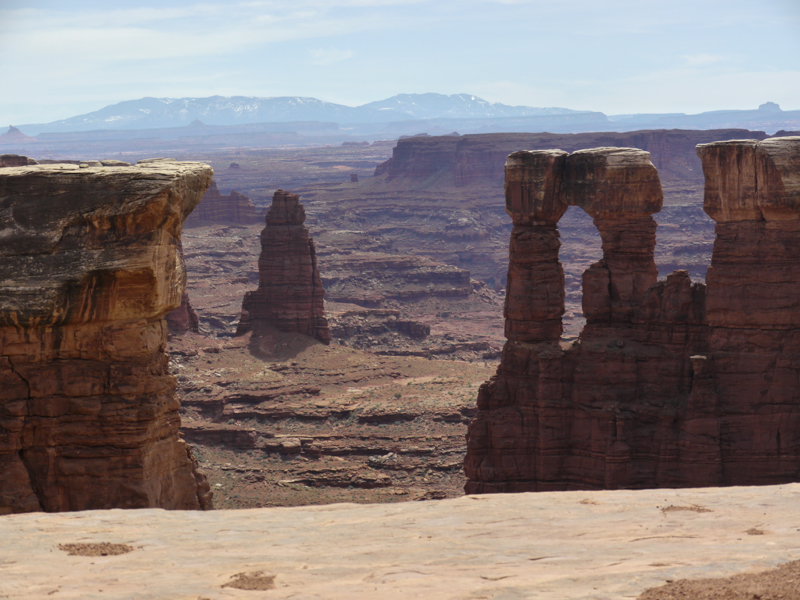 For his size and age Albert did a great job.  He rode roughly half the way and the other half he rode with either Lucy or me in the Suburban, but since I drove the passes he was with me quite a bit.  Since we had lots of time to talk we covered lots of topics including the workings of the internal combustion engine. 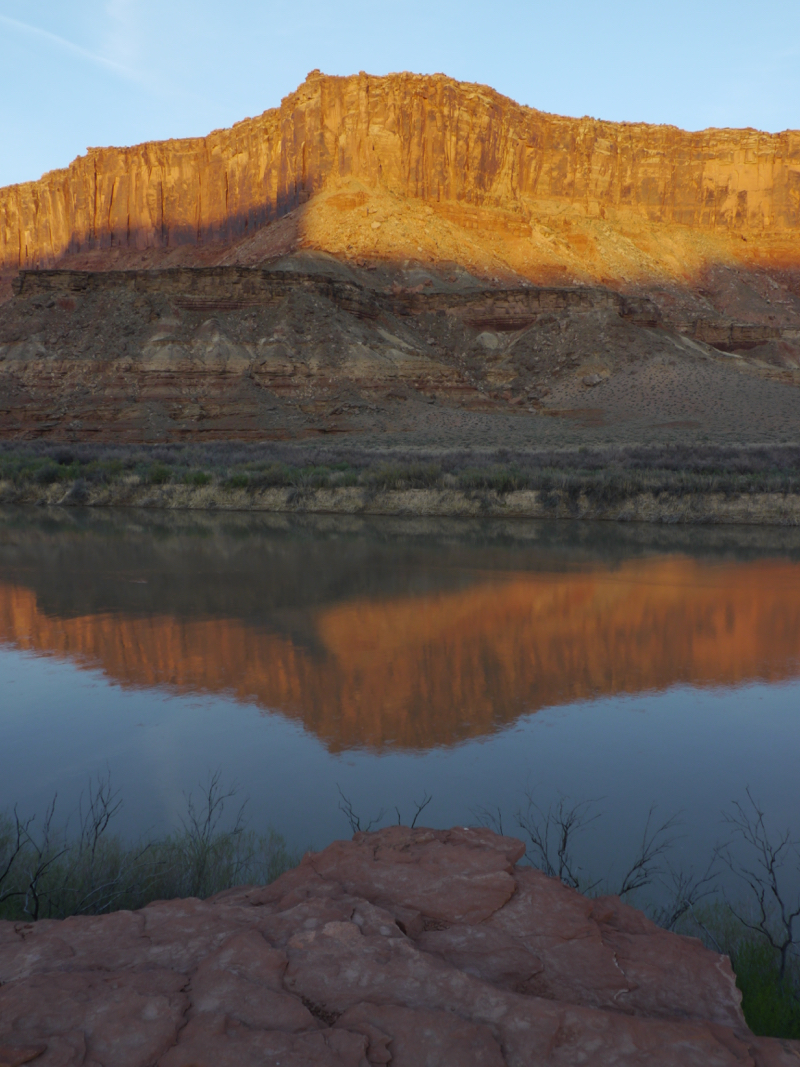 Because I was driving as well as riding I had opportunity to take photographs along the way.  I would also get up early in the mornings to take photos and take them in the evening. 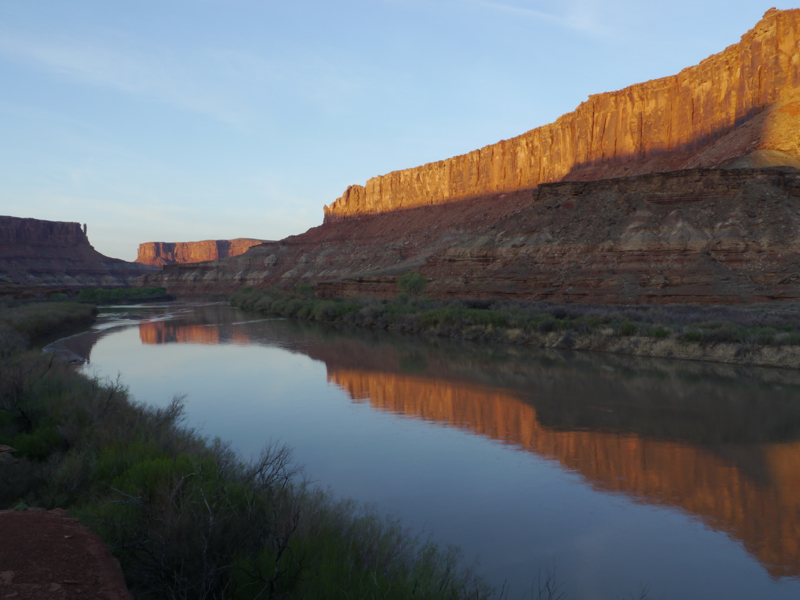 We got to know our neighbors much better along the way too.  They have become great friends. 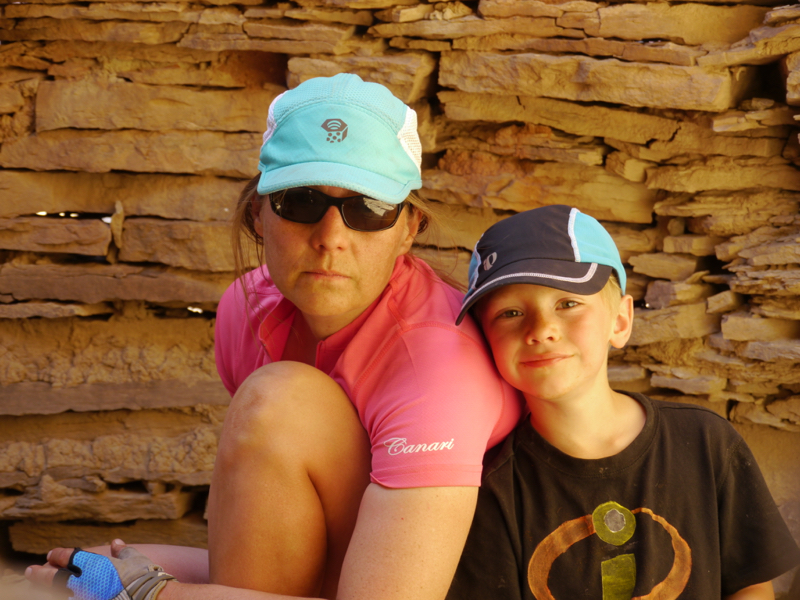 The loop itself is roughly one hundred miles with about six thousand feet of climbing along the way. I would guess that Albert rode forty or fifty miles on the bike. Calvin rode the whole way except for three miles and Zeke all except four miles. I thought it was pretty impressive how far and how well they all did. Lucy and I both rode about half of the way. I rode mostly flat sections and Lucy rode the bike on the steep sections where she didn't want to drive the Suburban. 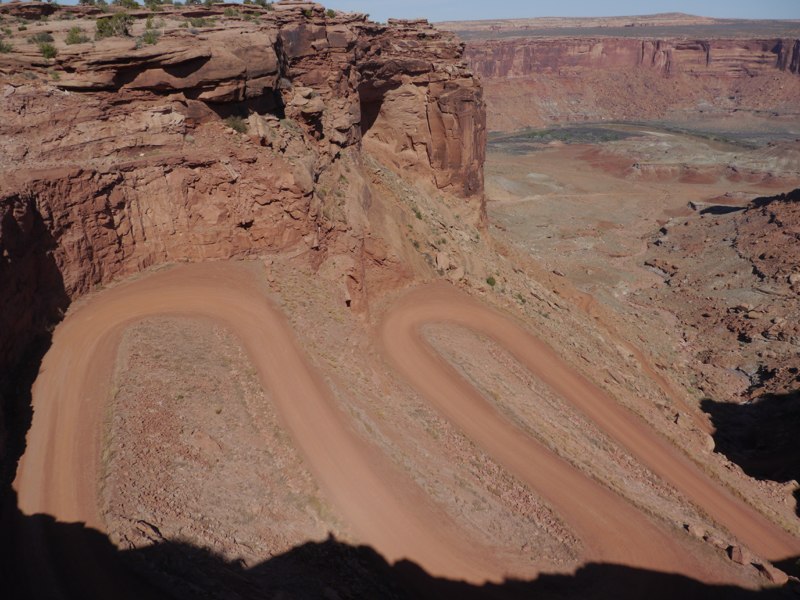 I came back from the trip thinking that I would really like to get the house paid off and trade in my job to be an archaeologist in Mexico.  I love having these adventures in my life.